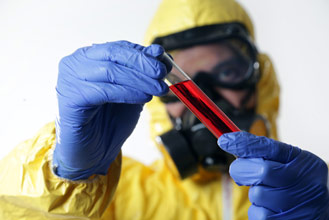 Ugandan President Yoweri Museveni has declared an immediate three-week lockdown in two high-risk districts of the country. This comes as healthcare workers are fighting a rise in Ebola infections.

Curfews will also be imposed. He added that places of worship, bars, gyms, saunas, and other entertainment venues will close but schools will remain open. Apparently, Ebola cant spread at indoctrination centers, only small businesses, and “places of worship. Also, all traveling in and out of the Mubende and Kassanda districts will be halted, Museveni said in a televised address on Saturday. There is another exception for cargo trucks though. They will be allowed to enter and leave the areas.

The United States Begins Screening Travelers From Uganda For Ebola

“Given the gravity of the problem and to prevent further spread and protect lives and livelihoods, the government is taking extra measures that require action from all of us,” Museveni said.

Ebola is a rare but deadly disease. It spreads through direct contact with body fluids and is not transmitted through airborne viral particles, the US Centers for Disease Control and Prevention (CDC) says.  According to reports by mainstream media, it’s all about when a “vaccine” becomes available. And we all know how well the last “vaccine” they tried to force on us worked:

[Ebola] has no cure, and there is no approved vaccine, although there is a concerted effort to create one. –CNN

The sociopaths who think they can rule over us are just waiting for big pharma’s next “vaccine” concoction.

World Health Organization Director-General Tedros Adhanom Ghebreyesus said the vaccines used successfully to curb recent Ebola outbreaks in the Democratic Republic of the Congo are not effective against the type of Ebola virus now circulating in Uganda.“ However, several vaccines are in various stages of development against this virus, two of which could begin clinical trials in Uganda in the coming weeks, pending regulatory and ethics approvals from the Ugandan government,” said Tedros.

According to the CDC, a person infected with Ebola “is not contagious until symptoms appear (including fever, headache, muscle and joint pain, fatigue, loss of appetite, gastrointestinal symptoms, and unexplained bleeding).” The virus spreads through direct contact with body fluids and is not transmitted through airborne viral particles, the CDC says.

Back in May, we speculated that another hemorrhagic fever could be the cause of lockdowns and another attempt to mass vaccinate the public. Considering you cannot read an article by the mainstream media that doesn’t mention the diligent effort to release a vaccine, it could come to fruition.

In June of 2016, SHTFPlan warned of “catastrophic failures” at a level 4 bio lab containing both smallpox and Ebola. It’s interesting that now monkeypox is on the rise, and alarmingly similar to smallpox.

Some of these biological agents are already nearly unstoppable in terms of cures, vaccines, or other containment strategies. All of them have the potential to mutate as they spread throughout the population. Do not forget that Ebola is already much more deadly than any variant of the alleged COVID-19 scamdemic could ever hope to be. An Ebola virus could mutate to become transmissible through the air (either naturally or assisted by science).

Your best bet is to prepare for the worst and hope for the best. The following will help you prepare for a real pandemic, one that actually does exist and doesn’t need faulty numbers, lies, or fraudulent tests to prove its existence:

We will be keeping an eye on this one. Anything is possible especially if it advances the Great Reset agenda.