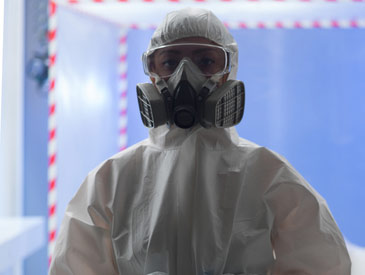 How safe are the government’s BSL-4 labs containing some of the world’s most deadly pathogens?

Turns out, not anywhere near as safe as you’d hope.

In fact, there is more reason than ever to think that things could play out like the plot of an unsettling pandemic movie – where, say, a virus escapes from a government lab and spreads rapidly throughout the population.

And unfortunately for all of us, the dense cities and sprawling suburbs of modern development are all-too-vulnerable to the rapid, viral spread of a contagion, as numerous flawed laboratories seem ready to fail and unleash something unspeakable.

An exposé in USA Today shows the frightening potential for looming disaster:

Encased in spacesuit-like gear needed to protect them from the world’s deadliest viruses, four scientists at the Centers for Disease Control and Prevention stepped into their lab’s decontamination chamber where a shower of chemicals was supposed to kill anything on them and make it safe for them to exit into an adjacent changing room.

But the shower wouldn’t start, and warning lights appeared as a cascading series of safety systems began to fail inside one of the world’s most advanced biosafety level 4 labs. That’s the highest level of containment and security, reserved for work with deadly Ebola and smallpox viruses and other pathogens that lack vaccines or reliable treatments.

The shower’s door back into the infectious disease lab “forcefully” burst open again and again – and they couldn’t even hold it shut. Meanwhile, air pressure alarms were blinking and monitors displayed the lab as “red,” according to records of the February 2009 incident recently obtained by USA TODAY under a Freedom of Information Act.

[…] “The incident summary reads like a screenplay for a disaster movie,” said Richard Ebright, a Rutgers University biosafety expert who reviewed the report at USA TODAY’s request and called it a major incident.

“Overall, the incident shows that failures — even cascading, compounding, catastrophic failures of BSL-4 biocontainment labs occur,” said Ebright, who has testified before Congress about CDC safety issues. “And the attempted cover-up within the CDC makes it clear that the CDC cannot be relied upon to police its own, much less other institutions.”

The CDC made excuses, claimed that no breach of safety had occurred, and essentially tried to sweep it under the rug and cover up the incident as ‘no big deal.’

There has been an attempt at oversight in Congress in order to reign in dangerous practices and establish a realistic understanding of the risk involved in this kind of advanced bioweapons research.

But the truth is, that there is no stopping certain things from breaching the lab and spreading.

A veritable Noah’s ark of the world’s deadly viruses, bacteriological/biological agents and other pathogens that are part of ongoing research in top lab facilities are supposed to be safe because strict protocols are maintained to keep everything contained.

These fail safes are misleading though. This report proves that mishaps happen, and even the best protocol can’t prevent every accident from happening, let alone the potential for a covert individual to smuggle out any of these materials deliberately.

Some of these biological agents are already nearly unstoppable in terms of cures, vaccines or other containment strategies, and all of them have the potential to mutate as they spread throughout the population.

And the potential is much worse than public discussion has acknowledged:

An Ebola virus could mutate to become transmissible through the air. The current Ebola virus’s hyper-evolution is unprecedented; there has been more human-to-human transmission in the past four months than most likely occurred in the last 500 to 1,000 years. Each new infection represents trillions of throws of the genetic dice.

Recall that the 2014 outbreak of ebola in Western Africa led to a patient in the United States and who potentially exposed an entire hospital and all its staff and doctors.

One patient with ebola overwhelmed the entire medical system and put the entire country on edge as fear over how far it would spread gripped Americans and the world.

While the possibility of a mass pandemic again seems distant, the potential remains very real.

This USA Today story is a reminder of how vulnerable our modern system really is.

These alarming stories about the mismanagement at the CDC should give pause to every American.

Who the hell do they think they are, and why are they so delicately toying with our lives and safety? One wonders if some of them wouldn’t like to see a virus wipe out a large portion of the population, anyway.

Could it happen by accident, or on purpose in the fashion of a spectacular movie plot?

Here’s what you should do if you find yourself even remotely near these scenario in the real world.

No matter what the media or government officials try to tell you about how safe and secure everything is, now is the time to avoid society like the plague and use your prepping skills to stay off the radar and away from the pathways of infection.

If you are in an area where others have Ebola:

Healthcare workers who may be exposed to people with Ebola should follow these steps:

The Prepper’s Blueprint: What to Do in a Pandemic, and Other Essential Survival Skills