Deutsche Bank Elitists Warn: “The Age of Disorder” is Coming! 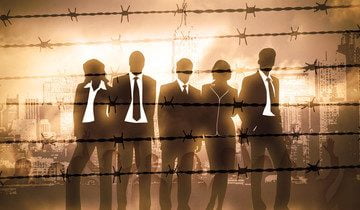 The ruling elites from Deutsche Bank are warning that the “age of disorder” is coming. If you know anything about those wealthy bankers who pull the strings of the political puppets, you know they desire to control and own the world, and regularly use the phrase “ordo ab chao.” Order out of chaos.

Deutsche Bank analysts have said in a new research note, that this “age of disorder” will likely reshape politics and economics. And you can bet none of that “reshaping” will be done in the best interests of the general population. They will “reorder” society as they see fit to keep us in a two-tier society as their slaves.

While we saw “the best-combined asset price growth of any era in history, with equity and bond returns very strong across the board” since 1980, “the Age of Disorder” is likely to break this trend, said Deutsche Bank elitists, according to a report by RT. Economic war will go on complete with tariffs, sanctions, and attacks in the technology sphere regardless of who wins the 2020 presidential election say the banksters.

These slave masters want to shift even more power and fiat currency away from the public and into their hands.  “Such a shift in the balance of power could include a harsher inheritance tax regime, less income protection for pensioners, more property taxes, along with greater income and corporates taxes… and all-round more redistributive policies,” the Deutsche Bank report said. Translation, be ready to be their slave, and obey their commands.

Pay attention and be aware of what’s going on, but do not live in fear. Knowing is different than fearing.  It gives you the opportunity to prepare yourself and get ready for what they have planned for us.

This is all a scam to force us to be slaves to the elites. The government is in on it and most of them are puppets of all of these “elitists” who think they have the right to own others. Slavery needs to be abolished for good, and all forms should go including enslavement to democracy. The fact that that’s a “controversial statement” is a testament to how well they have been able to control the minds of the public.