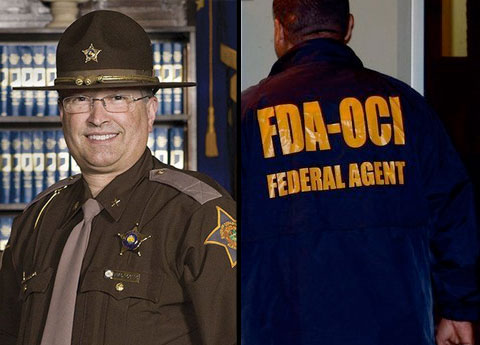 While many are still reeling from the outrageous shooting of LaVoy Finicum, and the aftermath of the Oregon standoff and arrest of patriots linked to it, there are other battles against the feds taking place across the country.

Much less attention was paid to Sheriff Brad Rogers, of Elkhart County in Indiana, who just successfully concluded his own showdown with federal officials from the FDA. The scenario was quite different, but the principals involved strike a similar chord – burdensome overreach and tyranny on the part of the federal government and its swarm of agents.

As activists have seen in many other cases, the FDA has gone after raw milk farmers and raw food proponents with frightening force – carrying out SWAT raids, trumped up arrests and destruction of food – all with no valid reason, and plenty of appearance of outright harassment.

Sheriff Rogers investigated a complaint from a constituent farmer and found that he sided with his case – there was no justified cause for invasive inspections happening repeatedly since 2011 every couple of weeks.

Basically, they were just looking for a reason to shut the farmer down, and Rogers put a stop to it.

Off The Grid News reports on this inspiring development, and its implications for a winning strategy against what is going on in this country:

Federal agents subjected a farmer to harassment and warrantless searches simply for producing raw milk, but a county sheriff took the farmer’s side and blocked federal agents from the property – and the sheriff is now speaking out.

The US Food & Drug Administration (FDA) and Department of Justice (DOJ) took the actions four years ago simply because the farmer was providing raw milk to an organic food co-op. The story is receiving renewed coverage because the Indiana sheriff, Elkhart County’s Brad Rogers, wrote a 600-word explanation for a local newspaper as part of his “Ask The Sheriff” series. Off The Grid News previously reported on the dispute.

“Specifically, the FDA was inspecting his farm without a warrant as much as every two weeks,” Rogers wrote. “Typical inspections occur annually. The Department of Justice (DOJ) had subpoenaed him for a grand jury in Michigan in which he was to bring his production documents. The Feds wanted to make this farmer an example.

“My research,” Rogers added, “concluded that no one was getting sick from this distribution of this raw milk. It appeared to be harassment by the FDA and the DOJ, and making unconstitutional searches, in my opinion. The farmer told me that he no longer wished to cooperate with the inspections of his property.”

Reportedly, Sheriff Rogers than wrote to the Department of Justice and informed them of the actions he would take if federal inspectors did not have a signed warrant based upon probable cause over which to conduct their searches:

“I understand that you have made recent requests to (the farmer) for documents and to appear before a grand jury, and he has had a number of inspections and attempted inspections on his farm within Elkhart County. This is notice that any further attempts to inspect this farm without a warrant signed by a judge, based on probable cause, will result in federal inspectors’ removal or arrest for trespassing by my officers or I. In addition, if any further action is taken by the federal government on (the farmer), while he is in Elkhart County, I will expect that you or federal authorities contact my office prior to such action. I will expect you to forward this information to your federal associates, including the FDA.”

Shortly after the email was sent, the farmer received a certified letter from the DOJ that said his grand jury subpoena had been cancelled. No federal inspectors have visited the farm since 2011.

“Your local elected officials … can stem the tide of federal overreach if they apply just a little backbone in supporting and defending the Constitution. Expect it! Demand it!,” Rogers wrote. “Some bloggers and natural food writers have hailed me as a hero. I’m no hero. I’m just doing my job.

The public is waking up to the tyranny of countless federal agencies with little or no transparency and enough red tape to take over everything. Many law enforcement officials are waking up, too, and there are many great examples of them standing up for the Constitution and the rights of the people.

The actions taken by Sheriff Rogers are not only legal and right, but they are what the people should expect from their local (and especially elected) officials.

This same sheriff made news a few months ago when he vowed that he would ignore any gun control executive order:

Sheriffs just happen to be the most powerful and independent locally elected official, and can be a bulwark for resistance to federal encroachment.

The feds cannot take over if the people educate themselves and stand up – peacefully, but with a firm defensive posture – and take no guff from a bully.

New Legislation Targets FDA Raids: “We Have Too Many Armed Federal Agencies and We Need to Put an End to This”

Gov SWAT Teams Target “Rugged Individuals” Who Grow Their Own Food, Produce Their Own Electricity