ERs Are OVERRUN With People Suffering From “Sudden Cardiac Arrest” 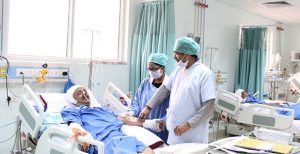 Emergency rooms across the United States are filling up with people suffering from major health issues. Unlike during the height of the “pandemic” when hospitals were empty and devoid of any human life.

The scene being painted is in stark contrast to where emergency departments were at the start of the pandemic. Except for initial hot spots like New York City, in spring 2020 many ERs across the country were often eerily empty. And even in New York City, despite KHN‘s claims, the hospitals were empty.

COVID isn’t overwhelming the health system either.  Patients are showing up to the ER sicker than before the pandemic, their diseases more advanced and in need of more complicated care. The mainstream media is blaming it on people putting off care during the hoax scamdemic to avoid getting the common cold they relabeled COVID-19.

A report by NRP even stated that the problem isn’t COVID patients. Bloomberg Quint has reported that even though 80% of Coloradoans have been “vaccinated,” the hospitals are still overrun. But the governor claims it’s those pesky “unvaccinated” people filling up the hospitals.

Colorado’s governor Jared Polis said that the only way to relive the hospitals, is of course, for the 20% who continue to refuse the shots to take them. operative, if everybody was vaccinated. “This is particularly tragic now because it’s essentially entirely preventable,” Polis said. The state may soon ask the Federal Emergency Management Agency to augment stretched hospital staffing, he said, in addition to employing the crisis standards that set guidelines for rationing care, he said.  Colorado has one of the highest vaccination rates in the country as the governor begins to talk of rationing care.

Is this just a coincidence?