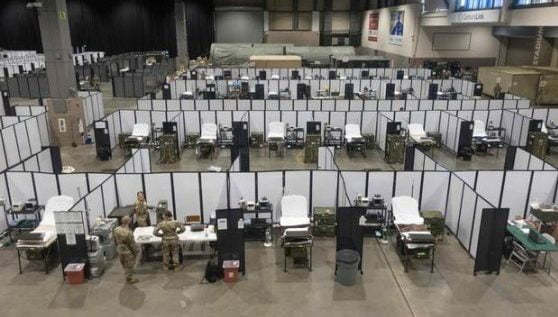 We are slowly getting a feel for what medical tyranny’s dystopia is. A woman in the United Kingdom has now been banned from every hospital after she proved those hospitals are empty and devoid of the COVID-19 patients the ruling class continues to use as an excuse to terrorize and enslave the public.

Thirty-year-old Hannah Dean has repeatedly filmed and shared videos of what she called “empty wards” at hospitals across the UK.  The mainstream media continues to demonize people who buck the official narrative and refuse to be enslaved by others.

On Saturday, Dean entered the Royal Bournemouth Hospital, roaming it for about 10 minutes before getting caught by a nurse and being kicked out. The following day, she visited Queen Alexandra Hospital in Portsmouth.  Dean shared her videos on social media and with others after proving the hospitals are not being overrun by people “dying of COVID-19,” according to RT.

No one is allowed to question the official narrative of the government and their propaganda campaign designed to enslave and control us.

Dean will be “allowed” to use a hospital if she has an emergency.

This isn’t the first time a woman in the UK has taken to proving the masters wrong either.

A woman from the United Kingdom has been arrested after she blew the ruling class’s official narrative out of the water. The 46-year-old used a camera to film the inside of an EMPTY hospital after weeks of the media reporting that “tier 5 lockdown” is needed as the hospitals are overrun with COVID patients.

These lies about this scamdemic won’t stop and the totalitarian New World Order rollout will continue until people wake up to the reality of what’s being done.  This has never been about health; it has always been about control. Now, a woman has been arrested for proving the ruling class and its lapdog media continue to lie to us to stoke the fear needed for our permanent enslavement.

In spite of the media’s lies, public data shows that hospitals are indeed emptier than at this time last year, with beds being at 89% occupancy compared to 95% occupancy in December 2019. In regions across the country, critical care occupancy rates are also lower than the 3-year average, according to a report by ZeroHedge. -SHTFPlan

There is an effort to silence any and all dissent, and those who want the abolition of the last form of modern slavery (government) are being demonized for wanting humanity to be free.

Slavery was never abolished, it was only extended to include all the colors. – Charles Bukowski