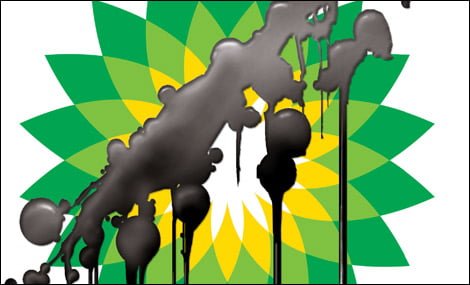 During President Obamaâ€™s May 27, 2010 press conference he announced that he would be extending the moratorium on offshore drilling for at least another 6 months. This announcement just happens to coincide with the time of year that the demand for oil historically spikes â€“ the summer time. Of course, all you economics majors out there know that a decrease in production at a time of historically increasing consumption is a recipe for inflated prices.

WHY OIL GOES UP IN THE SUMMER

There are many reasons for this: increased travel, higher demand for plastics and other oil based goods, increased usage of natural gas (a byproduct of oil drilling), inclement weather such as hurricanes which often disrupts distribution and threatens shortages, etc. However, something that many people donâ€™t know is that a different mixture of gasoline is used in the summer time which is designed to burn better it hotter temperatures. Changing over to the new formula is expensive and oil companies simply pass on this expense to consumers. The same thing happens in the winter time when they change back to the cold temperature formula; however the other factors, such as increased travel, usually arenâ€™t present. 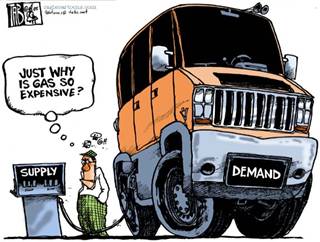 OTHER REASONS OIL WILL SPIKE

The Spill Itself. The spill in the Gulf of Mexico is continually decreasing the supply of oil in the world at a pace which experts both at BP and our federal government can only guess at. The guesses have ranged from 1,000 barrels to 60,000 barrels per day. Since itâ€™s in BPâ€™s best interest to underestimate the severity of the spill and since the federal government never likes to create a panic, it is safe to assume that the real number is closer to the higher end of the guess, if not beyond it. Additionally, estimates of how much longer the deepwater well is going to leak range from weeks to years!

Oil Prices have been in a Down Trend. Simply put, commodity prices are still very much tethered to the stock market, which has had a very rough time recently (losing over 10% in just over a month). According to Peter Schiff â€œOil prices should be going through the roof right now. The only reason theyâ€™re not is because of the broad-based sell off around the world in equities, commodities, and other currencies due to the fear of contagion in Europe. This is trumping the very very bullish news for oil. But once we hit a bottom, I think weâ€™re gonna see a huge increase in the price of oil.â€ Here is the entire video blog where he discusses this along with a few other things:

See the Bloomberg Oil Index below. Oil is currently just above its one year low. 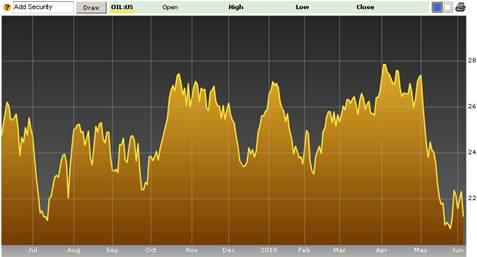 Peak Oil. Most people realize that our planet is quickly running out of the black stuff. The recent downturn in oil prices, I believe, provides a major buying opportunity so that you can position yourself for a PERMANENT INCREASE in the price of oil which many believe is right around the corner.

HOW TO BUY OIL

There are many oil and gas ETFs and trusts: USO, BTE, PWE, UNG, OIL, and many others. Of course you can also buy oil companies. I suggest you do a lot of research on the fund or company before you buy, as some will do much better than others. Any exposure to oil however, I believe, is good exposure, given the fundamentals.