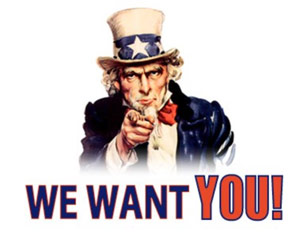 This report was originally published by Michael Krieger at Liberty Blitzkrieg

War is a Racket

WAR is a racket. It always has been.

A racket is best described, I believe, as something that is not what it seems to the majority of the people. Only a small “inside” group knows what it is about. It is conducted for the benefit of the very few, at the expense of the very many. Out of war a few people make huge fortunes.

– From Major General Smedley Butler’s War is a Rackett

This is one of the most important articles I will write all year. The statists are coming for your kids, and the conditioning has already begun.

Last night, I came across one of the most horrifying articles I have ever read, which is saying a lot. Before I get into it, take a look at the title and the tagline:

If you think the title is bad, wait until you read the article. What becomes evident is that this grotesque concept of forced “national service” is being actively discussed at the highest levels of government. What Ron Fournier is doing in his National Journal article is conditioning the public to accept something that is completely unacceptable.

Before we get to that, who is Ron Fournier? National Journal provides a bio:

Ron Fournier is the Senior Political Columnist and Editorial Director of National Journal. Prior to joining NJ, he worked at the Associated Press for 20 years, most recently as Washington Bureau Chief. A Detroit native, Fournier began his career in Arkansas, first with the Hot Springs Sentinel-Record and then with the Arkansas Democrat and the AP, where he covered the state legislature and Gov. Bill Clinton. In January 1993, Fournier moved to Washington, where he covered the White House and presidential campaigns for the AP.

So basically, this guy covered Bill Clinton in Arkansas, moved to the District of Criminals after he was elected President, and now wants to convince you to subject your innocent children into mandatory service to a nation provably run by corrupt criminals and oligarchs.

It sure is some twisted notion of “shared sacrifice,” when those who had nothing to do with the disastrous choices made by the oligarchy are the ones who have to suffer the consequences.

Let’s now take this piece of Nazi-esque propaganda apart piece by piece. From the National Journal:

I know a better way to fight ISIS. It starts with an idea that should appeal the better angels of both hawks and doves: National service for all 18- to 28-year-olds.

Require virtually every young American—the civic-minded millennial generation—to complete a year of service through programs such as Teach for America, AmeriCorps, the Peace Corps, or the U.S. military, and two things will happen:

First of all, he confidently proclaims that this scheme will appeal to both hawks and doves. Based on what evidence? Let me provide some evidence against his argument based on a recent Rasmussen poll that 45% of U.S. Voters Concerned Government Will Use Military Training Exercises for Power Grab. Here’s an excerpt from the findings:

So the American public has no confidence in government, but somehow they are going to gladly line up to serve the corrupt oligarchy? Of course not, which is why people like Ron Fornier want to make it mandatory. Now back to the piece…

1. Virtually every American family will become intimately invested in the nation’s biggest challenges, including poverty, education, income inequality, and America’s place in a world afire.

2. Military recruiting will rise to meet threats posed by ISIS and other terrorist networks, giving more people skin in a very dangerous game.

This may seem like a radical plan until you compare it with two alternatives: the status quo, which clearly isn’t working, or a military draft, which might be the boldest and fairest way to wage the long war against Islamic extremists.

Notice how he offers us only three options, as if that is all the imaginative well of humanity is capable of coming up with. Forced national service, the status quo or a draft. Nowhere does he offer the logical alternative of say: stop preemptively invading and destroying countries for no reason (Iraq, Libya to name a few).Perhaps then idiotic foreign policy decisions won’t create ISIS in the first place.

This is an important lesson in how statists operate. They only offer you statist choices. Kind of like being forced to choose between a Clinton and a Bush for President.

The Draft Act is highly unlikely to be law, given the nation’s post-Vietnam resistance to the mandatory military service and the relative success of an all-volunteer armed forces. Which leads me to the year-of-service plan: It stops far short of a draft while drawing on the ethos of communal sacrifice.

Notice how he cleverly started the piece by mentioning the Peace Corps, Teach for America, etc, and only listed the military at the end? Pure smoke and mirrors. His entire point is to push for mandatory military service. No one wants to fight any more unnecessary wars to boost corporate profits, and any statist worth his or her salt knows full well mandatory conscription will be necessary in order to maintain the power position and wealth of the status quo going forward.

Finally, just in case you think this is merely some hack journalist mouthing off, Mr. Fournier makes it clear that this is being discussed at the highest levels of government.

I spoke about the concept with retired Gen. Stanley McChrystal, who commanded forces in Afghanistan and Iraq and now chairs the Franklin Project, part of the Aspen Institute that is trying to position a year of full-time national service—a service year—as a “cultural expectation, a common opportunity, and a civic rite of passage for every young American.” His logic tracks with mine.

Second, if this president or his successor gets serious about ISIS, McChrystal said the effort would require an international coalition and more U.S. troops. “Even if we didn’t need a draft” to drum up the required troops, McChrystal said, “I would argue we need a draft, because it forces national commitment.”

Forced national commitment to a government nobody believes in. Can’t wait to see how that works out.

“A problem in America is we’ve let the concept of citizenship diminish into a series of gripes,” McChrystal told me. “One of the ways we can rebuild that sense of ownership, sense of shared ownership, is through experience, and so I believe that every young person deserves—I don’t think this is an onerous thing—deserves the experience of being part of something bigger than themselves.”

No General McChrystal, we have let the concept of democracy diminish into a corrupt, thieving oligarchy. In case you need proof: New Report from Princeton and Northwestern Proves It: The U.S. is an Oligarchy.

Bowing to political realities in risk-averse Washington, the Franklin Project aims to make a service year a social expectation rather than a legal requirement. I would mandate it. So would McChrystal—if he had his way.

While ISIS and other terrorist groups are having no trouble recruiting suicide bombers, McChrystal said, Americans are struggling to redefine their national identity for the 21st century. “A year of service for young Americans would be a step,” he said. “Not a panacea, a step.”

This paragraph unintentionally says a lot. You want to fight an army of radical volunteers created by your own foreign policy crimes by forcing people who have no trust in their government to join the military? It’s an idea so stupid and destructive, only a rabid statist could conceive it.

Before concluding, I want to emphasize how dangerous this line of thinking is. It is precisely because I see these sorts of things coming down the road, that I do what I do with this website. The only way to stop statist plans like these is to win the war of ideas before they have a chance to dazzle you with their next bit of propaganda.

Accusations Emerge That the U.S. Is Aiding ISIS – The Latest “Conspiracy Theory” Circulating in Iraq

Leon Panetta, Head of Pentagon and C.I.A. Under Obama, Says Brace for 30 Year War with ISIS

The American Public: A Tough Soldier or a Chicken Hawk Cowering in a Cubicle? Some Thoughts on ISIS Intervention