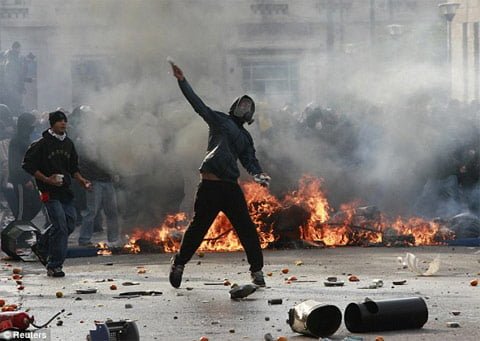 This article was written by Mike Adams and originally published at Natural News.com

Editor’s Comment: There is no end to the ridiculous. It seems that the radical left are claiming their rightful place among a kingdom of lunatics. Perhaps there is a great deal of unstable and bizarre behavior that can be blamed on extreme weather, sporadic climate events and increasing heat from global warming – if so, any type of violence, instability or ‘heated’ emotions can be attributed away. And right now, it is still winter time — just wait until the dog days of summer arrive. Things could be pretty chaotic by then…

Moreover, the connection attempted by the ridiculous paper seems to be further evidence that the entire narrative is increasingly focused on growing tensions between left and right factions, and an increasing tendencies towards out-and-out civil unrest, riots and the consequential pattern of martial law and restrictions on free speech. If it all leads, in the end to less freedoms, it will somehow be all our fault for mankind’s causing climate change… even as loonies on the left remain driven by a larger disturbance in the force.

They will use any excuse at all… just get ready in case the violence and turmoil hit your area sometime soon. It seems that chaos is on the menu…

In what seems like a nod to violent protesters like the unhinged left-wing rioters who recently attacked Milo Yiannopoulos at UC Berkeley, Iowa State University scientists have published an analysis that claims global warming is the root cause behind the increase in violence we’re witnessing right now across society.

Not only does the analysis fall for the global warming climate hoax based on fraudulently manipulated temperature data and severe scientific fraud committed by the NOAA, it also seeks to dissociate violent left-wing rioters from any responsibility for their own behavior. In effect, the analysis asserts that “victims of global warming” are not responsible for their own hateful, destructive actions because, essentially, “the planet made them do it.”

This fits perfectly with the victimology of the hate-filled Left, which now openly justifies murdering individuals they don’t like in order to halt their free speech. It also reinforces the “victimology” philosophy of the failing Left by providing a convenient excuse for rioters who destroy property, commit arson and physically attack innocents. Their excuse is now, “global warming made me do it.”

“When people get uncomfortably hot, their tempers, irritability, and likelihood of physical aggression and violence increase,” says the analysis, implying that global warming somehow turns all of society into a kind of “Hell’s Kitchen” sweltering oven that relieves people of responsibility for their actions.

To state what should be obvious by now, even the most ardent supporters of global warming assert that global temperatures have risen very slightly, from an average of about 57 degrees (F) to just barely over one degree higher (58.7 degrees). Are we now to believe that people calmly sitting in a root at 57 degrees will become enraged, violent rioters at 58.7 degrees? That’s the absurdity put forward by these scientists.

Even that question assumes the global warming alarmists are telling us the truth… and they actually aren’t. Global temperature has risen and fallen based largely on volcanic eruptions and solar activity variations throughout Earth’s history. The following chart, courtesy of LongRangeWeather.com, shows temperature variations over the last 4000 years or so: What we now know is that global warming data are routinely FAKED by the government to fit the climate change narrative.

Here’s the chart of U.S. temperatures published by NASA in 1999. It shows the highest temperatures actually occurred in the 1930’s, followed by a cooling trend ramping downward to the year 2000: Meanwhile, the “97% of scientists agree with global warming” narrative is a complete fabrication based on obvious scientific fraud.

And never mind that 1,000 science papers have already challenged the false narrative of man-made climate change.

It also turns out that 100% of the “warming” claimed by NOAA and the U.S. government is actually built on altered data:

This chart shows how the REAL data (blue) were deceptively altered by NOAA (orange) to artificially create a “warming” trend that doesn’t exist. If you filter out just the “adjustments” to the raw data, here’s what you find: Temperature data being systematically (and fraudulently) altered to create the illusion of recent “warming…” Getting back to the Iowa State “science” article, it claims that “When people get uncomfortably hot, their tempers, irritability, and likelihood of physical aggression and violence increase.” Even if this is true, it’s irrelevant if the entire false narrative of global warming is a fraud.

Yet the article continues to argue that people can get “hot and bothered” in heated rooms and therefore this means global warming makes people violent:

What you’re seeing in their article is astonishing intellectual dishonesty. To equate a very slight “warming” of the planet (if it even exists) with human behavior observed in people who are forced to sit in very hot rooms is wildly dishonest. Why? Because the temperatures were wildly manipulated to extremes. Say the authors:

But the planet’s average temperature isn’t 97 F or we’d already be dead! As revealed above, even the most ardent global warming pushers only claim a little over one degree increase in average global temperatures. Thus, a more accurate scientific test of human behavior would be to have one group sitting in a room at 75 F, and another group sitting in a room at perhaps 77 F, then observe any difference in their behavior.

Instead, this study stuck people in COLD rooms at 57 F and HOT rooms at 97 F, from which these disingenuous science authors claim their behavioral aggression proves “global warming” is causing human violence and aggression.

Al Gore, by the way, says his apocalyptic global warming predictions have all come true, but you just couldn’t tell because, well, you’re not a scientist.

If global warming was strong enough to unleash all these apocalyptic predictions, don’t you think we’d notice?

In yet another kow-tow to the wildly false narrative of global warming, the authors also seem to argue that global warming is solely responsible for all “extreme weather” events which make people mad. From the article:

Increasingly frequent and extreme weather destroys homes and jobs and requires considerable emergency and recovery spending. The economic impact is disproportionately felt by disadvantaged and vulnerable populations, resulting in increased rates of poverty and income disparity. As with malnourishment, this is a problem by itself, but it also can lead to increased aggression: Income disparity can lead to life dissatisfaction, resentment, dissent, a desire for retribution, and even violence.

Once again, the authors fall for a common junk logic pitfall of global warming cultists: Imagining that no extreme weather ever existed on the planet before Al Gore declared global warming to be the cause. In truth, extreme weather has taken its toll with stunning regularity across the entire planet, spanning all of recorded human history (and geological records prove that extreme weather was taking place long before humans ever arrived on the scene). The bizarre idea that until the industrial revolution arrived, the entire planet was a serene, peaceful “mild” climate with no hurricanes, droughts or floods is just so incredibly stupid that it doesn’t even deserve one iota of scientific credibility.

Yet the authors go even one step further down the road of climate change quackery, even claiming that global warming is, in effect, responsible for the rise of terrorism! From the analysis article:

In fact, many of these same climate-change-driven factors aid in terrorism recruitment: Uncertainty and frustration about one’s livelihood, seeing others who seem unfairly unaffected, and the belief that there are no other viable options to sustain oneself may all contribute to terrorism.

Lost in their twisted argument is the far more obvious fact that LIBERTY is the single greatest way to stop poverty and uplift humankind through opportunity, self-determination and self-reliance. It is the lack of liberty — i.e. tyrannical government regimes — that trap people in cycles of desperation and poverty, often leading to North Korea-style mass starvation. Case in point: Socialist Venezuela, where a desperate population of clueless Leftists brought into power the very same socialist regime that’s now starving them to death.

But wait, there’s more! The authors also argue that “global warming” could lead to civil war due to people from foreign cultures engaging in mass migration (ecomigration) invasions of other areas, causing cultural conflict that can lead to war:

Among the most prominent group-level effects anticipated is ecomigration, where entire groups migrate in response to the physical, economic, or political instability brought about by an ecological disaster. Although ecomigration is not, in and of itself, a sign of aggression, it can lead to hostility and conflict through a sudden increase in competition for an area’s resources, bringing together people with opposing or incompatible worldviews, concerns about the intentions of both the migrant group and the local population, and a host of socioeconomic issues.

It seems these authors are inadvertently arguing in favor of Donald Trump’s border security executive order that sought to temporarily halt immigration from terror-prone nations. They are concerned about foreigners, essentially, invading our nation. Not because they might be terrorists, mind you, but because global warming made them do it.

The authors conclude their article with this summary: “Clearly, there is a need, and indeed there are many ways, for psychologists to weigh in on the issue of climate change and its relation to violent behavior.”

No doubt Leftists will leap on this call to action, decrying all the extreme violence carried out by their cult followers as “caused by climate change” which is, of course, blamed squarely on Republicans who support energy independence. Thus, when left-wing rioters are beating Milo Yiannopoulos fans in the face with baseball bats, they will be able to shout, “WE ARE THE VICTIMS!” (while citing “science” to prove it).

Yes, in academia, “achievement” is defined as your ability to make the utterly ridiculous sound scientifically plausible.

And that’s what all this has come to: Libard logic pretending to be science. It’s enough to make us all angry, regardless of the temperature in our room.

“Goddard shows how, in recent years, NOAA’s US Historical Climatology Network (USHCN) has been “adjusting” its record by replacing real temperatures with data “fabricated” by computer models. The effect of this has been to downgrade earlier temperatures and to exaggerate those from recent decades, to give the impression that the Earth has been warming up much more than is justified by the actual data.”

This article was written by Mike Adams and originally published at Natural News.com