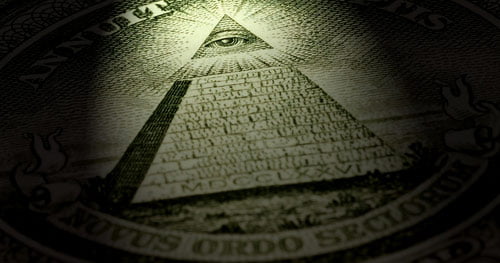 While the mainstream media focuses on which senile sycophant will be the bankers’ puppet for the next four years, the central banks are destroying what’s left of the economy and sovereignty to usher in the New World Order.  The election is all just a distraction from the real enemy; the banking cabal that runs the world and has already selected the next president.

The mainstream media seems to be part of a propaganda operation that is trying to change the conversation right now from what really matters, which is that the most powerful banking cabal in the world – the people who essentially own and operate the government of the United States, the West, and most of the world.  And if anyone dares to point out the New World Order is being forced on us right in front of our eyes while Donald Trump, who swore he’d “drain the swamp” is still occupying the White House, the cognitive dissonance rears its ugly head.

The truth is that Trump has only helped enrich the bankers and the elitists with the constant passage of more stimulus to cover for the central bank’s collapse. Those central bankers stole at least $7 trillion, primarily from poor people during the government-forced COVID-19 lockdown which destroyed small businesses all over the world. Poor people all over this planet are now starving while the fat cats in Washington rest easy after the printing of unlimited money for the world’s biggest wealthiest bankers. It bailed them out of their debt crisis and gave them the right to give themselves and their friends as much money as they want by printing it out of thin air and they are doing that even as we speak.

It will also be convenient to repossess all the land and building when those payments to the banks are not made later this year. The fact that people cannot see that the New World Order is progressing at a rapid rate and Donald Trump isn’t even putting speed bumps in the way is alarming, in and of itself.

And so then suddenly, just at the moment when they should have risen up and revolt and stormed Wall Street, stormed Washington, DC and overthrown these thieves who just conducted the biggest robbery in the history of the world, suddenly this conversation changes to race, and the ordinary working white people and black people are being turned against each other, talking about race, rather than this robbery, conducted under the premeditated pretext of a COVID pandemic which was almost certainly manufactured in a biological warfare lab, under the direction of the very bankers who have stolen six, seven or more trillion dollars based on this pandemic which they obviously plotted out in great detail ahead of time, as part of an effort for them to centralize their wealth and power to stop the rise of China by blowing up the globalized world economy that is the engine of China’s rise and to allow them to impose a top-down police state on the people of the West so they can be ready to continue to centralize and strengthen their control of the West and the world. That’s what COVID really was. And they’ve changed the conversation to race so that we don’t notice it. –ALWAGHT News

Wake up while you still can! I’ve been saying since the beginning of this nonsense that the only way to stop it is to disobey the immoral orders of government (which, at this point, is almost every single order and law passed) and make every preparation you can to leave the system.  The system they set up of centralized control and power over everyone requires you to have faith in it and participate.  It cannot work when people remove their compliance and leave their Matrix.

They do not want you to know that all you have to do, is refuse to be ruled and refuse to participate in their scam. Will they keep trying to manufacture your compliance with fear? Yes.  They could use food as a weapon, and any number of “waves” of the scamdemic to try to make you comply. But once you realize you don’t have any moral obligation to be owned or ruled, the power of the elites dwindles. Self-reliance is going to be a powerful skill in the upcoming months, and years. The more you can do on your own outside of their system, the better off you are going be.

This is a tough concept for those who have grown up in this system, and there will be others that will fight tooth and nail to protect it because they don’t know what it would be like to live a truly free life. Once you get rid of the mental barriers in the mind, however difficult it may be, you’ll see just how enslaved most Americans have allowed themselves to become.

The government is not coming to save you. They are in on it.  You must realize you are the one who needs to save yourself. This is a war for your mind.

As long as the mind is enslaved, the body can never be free. – Martin Luther King Jr.