This One Picture Shows Why You Absolutely Must Own a Gun: ‘He Was Allowed to Drive Away Alive’ 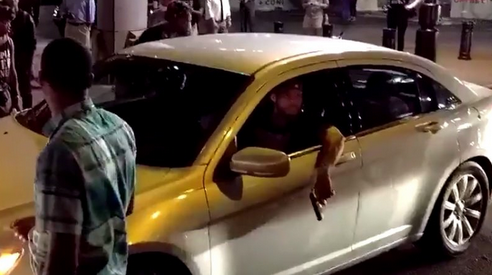 ‘He was allowed to drive away alive’ Image taken by Heather Head, Twitter

If you still had any doubts as to why the 2nd Amendment must be protected, and why self defense must be respected as the priority that it is, then just take a look at what happened during the already insane riots taking place in Charlotte.

Despite large cadres of riot cops on scene and North Carolina’s Gov. McCrory declaring of a state of emergency and calling in the National Guard, no one was able to protect the dozens of innocent bystanders who were beaten, attacked, intimidated and knocked over just because of the color of their skin or the fact that they ended up in the wrong place at the wrong time.

Numerous individuals and several journalists were targeted for physical attacks after the protest devolved into riots. At least one white man was dragged into a parking garage and beaten. One of the protesters was shot. Rocks and other objects were thrown, and the entire thing got out of control.

There’s little doubt that the authorities wanted to maintain order, but it wasn’t possible. And people got hurt.

But one person who wasn’t hurt by the violent and temporarily insane mob in downtown Charlotte was this guy:

While it is true that he brandished the weapon illegally according to North Carolina laws, when it came down to a confrontation with the mob, this guy got respect where others caught up in the scene did not.

Despite being angry at the world and lashing out at just about everyone, these protesters respected only those who were prepared to defend themselves.

Furthermore, he’s alive in part because the protesters were NOT violent and did not harm him. They could have.

For the record, concealed carry is legal in NC. Brandishing a weapon at a peaceful protest is not.

No one messed with him. He was concerned with his safety while driving through the chaotic demonstration, and there was no guarantee that he would pass through without harm or interference.

A video of the alarming moment was posted on social media by writer Heather Head in the midst of the chaos.

‘White dude drives into crowd of peaceful protesters, draws gun, allowed to drive away alive. With my own eyes. #CharlotteProtest,’ she wrote alongside the shocking clip.

People begin swearing and shouting ‘he’s got a gun’ as the car sounds its horn.

The man was reportedly allowed to drive away from the scene.

‘I’m so confused by the people saying he wasn’t [white]. I mean, I didn’t take a DNA sample or anything but I saw a lot more of him than a close-up of his arm, and he looked pretty white bread to me. His pals in the car too,’ Ms Head added when people questioned the man’s race.

In point of fact, the question of the man’s race isn’t settled…

@HHeadWrites Guy looks black to me. You still think that guy is white? pic.twitter.com/sCd1cqUIGZ

But that isn’t the point, or at least it shouldn’t be.

Once someone shouted ‘He has a gun,’ more people gathered around for a potential confrontation. The man opened the door and started to get out, but a police officer appears to convince him to get back inside and move on (the video is not entirely clear).

Ultimately, they decided to make way.

This was a bad situation, and it is unfortunate that so much harm was done last night.

Video of the protester being shot:

GRAPHIC: Civilian on civilian shooting at #CharlotteProtest. Rioters are claiming it was a police shooting. pic.twitter.com/LWRCi2yKDR

This protest crossed the line, with members of the crowd randomly attacking journalists and several white passersby, so the racial motivation was clearly in play, whether or not it was a factor in the incident with the man in the car: