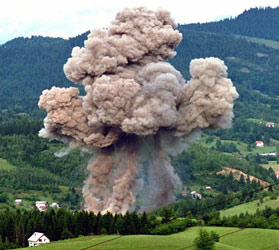 Editor’s Note: If you’ve done any research into worst-case scenarios and how to prepare for them then you have likely run across the work of Selco. During the Balkan war of the 1990’s he survived in what he calls One Year In Hell, which is also the name of his online survival course at his SHTF School web site. Selco often shares his perspective on the events he witnessed, the brutality of humanity, and survival strategies for making it through far-from-equilibrium situations.

But had Selco made one particular decision back in the 90’s there’s a strong possibility that we wouldn’t know who he is today – at least not insofar as his expertise on survival is concerned.

Ahead of the conflict that eventually led to a complete lock-down of the city in which he lived there were signs that something just wasn’t right. He, like many of his friends and neighbors living in a stable modern society, assumed that whatever was happening would either pass quickly or not affect him or his family directly. Admittedly, he was wrong and he says not heeding the warnings was one of his key mistakes.

It’s certainly easy to judge the events of the day in hindsight, but going through them in real time and having to make quick decisions like relocating your entire family from your home to an unknown destination is not exactly an easy thing to do. This is the dilemma many will be faced with should a local, regional or national emergency strike our nation. As always, Selco has some interesting insights and discussions that may make that difficult decision a bit easier to execute.

Bugging out: Why I missed best time to bug out
By Selco

Best way to survive is not being close to any problems. Like I describe in my survival course about my experience in Balkan war I missed my chance to bug out in time. I ended up surrounded by enemy army and trapped in city for a year without power and regular resources. Everyone fighting for the little what was left and being shot at by snipers and artillery from enemies did not make experience any better.

There are many reasons why people fail to bug out. Last week Jay (guy I run this website with) left Bangkok because of military coup. He first did not want to leave right away but then common sense won and he left. You can read about what happened in our forum. Nothing bad happened after he left, but it could have.

There can be many reasons like failure to recognize that S. gonna hit the fan, blocked streets on the way out of the city, problems convincing everyone to leave or just some special events you want to stay for.

I mention many times why I failed to leave city before everything became blocked. So I said that simply I did not see signs, or even if I saw something that looked serious to me, I assure myself that everything gonna be OK in short.

And of course media was there to told us that everything gonna be fine, nothing gonna escalate etc. and all of this above is true, it was like that, but as the time goes by I am able to see one more mistake that I have done that contributed to the my choice of staying.

Actually it was not really choice, I failed to see that I had big choice to make back then. We humans like to go with the flow and that is what I did. There was no choice, just years later and when your freedom is taken you realize you failed to make right choice.

So the big mistake I also made was the fact that I was simply thrilled and excited how events are unfolding in front of my own eyes, it was kinda mesmerizing.

You know that feeling that you are going to be part of something big, something that it is gonna be part of history books?

I had that feeling on some subconscious level I guess.

At the beginning it was like being in a movie, but pretty soon we all were like “f..k, people get killed for real here”.

One day after another day, events simple unfolding, more dramatic after dramatic. It is a bit like slow collapse that we experience now, changes come step by step, even in short time but it is all exciting until one point and then it can be too late.

This is what happened, one day it was simply too late to leave.

Now you need to understand me that this was not the only reason why I stayed in the city, it was not even most important, I speak about everything in detail in my course. But still it was the one of the reasons and one of the reasons that can be easily overlooked.

It is important to be mentioned here, simply because I can see and read in many places that lots of people still make similar mistakes. It is simply interesting for them to stay and see what is going to happen.

For those of you who were part of some SHTF event, whatever it was, some natural disaster or similar, you may understand what I am trying to say. Arrah who lost almost everything in devastating hurricane Haiyan in Philippines writes about this too.

It is the fact that timing of events is not going to wait for you, it is going to unfold on its own, and at the end it is simply gonna overrun you if you are in its path.

You will be left behind to sit through consequences or destroyed.

People often act like world is spinning around them, and like nothing bad is going to happen to them, while in reality you (and me) are nobody in the bigger picture. When you get more experience as survivalist and prepper you maybe even become arrogant and think you know what you deal with and can stay and wait.

I was young then, and my blood reacted different on gunshots, screams, or hearing about attacks or defense, or pride and similar, so I can blame that too. But still, it is easy to fall into the thinking of “staying to see events”.

Oh it was interesting for sure, especially in the beginning, before I realized fact that people died in great numbers, and that there is a huge possibility that I could be killed too, and it would not be some big event and very soon it is over.

Later it was all about trying to survive, something like a constant running for your life. You become a very humble man if you almost lose all control over things around you.

And remember the saying: “May you live in interesting times”, but also remember that it is as much curse as it can bring you excitment in good times. So if you see that “interesting times” are coming to your neighborhood, just leave the area, it is much better to be “bored” but alive somewhere else.

Did you draw clear line for yourself when you bug out or bug in? Discuss in our forum or in the comments below.