The First OilCane? What Happens if a Hurricane Rides over the Oil Spill

This article has been generously contributed by OilPrice.com. 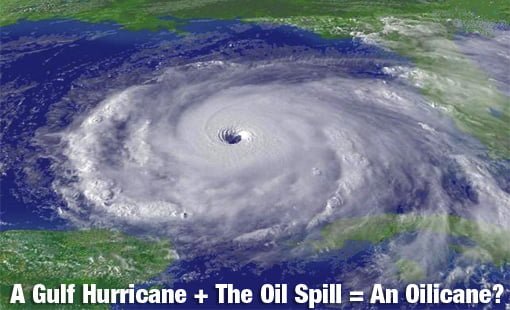 The gulf oil spill is bad but it could become much, much worse and soon. The threat is a hurricane moving over the spill. If a hurricaneâ€™s violent winds track over the spill, we could witness a natural and economic calamity that history has never recorded anywhere or anytime. We will literally be in oil-soaked waters. We will have witnessed the first oilicane.

Water temperatures in the Atlantic Ocean are now running as warm or warmer than they did during the record setting season of 2005. This is significant. Warmer water means more heat and humidity over the tropical ocean to fuel hurricanes. Just as a car needs gasoline to fuel its engine, a hurricane needs hot, humid air because a hurricane is little more than a gigantic atmospheric engine. The warmer and more humid the air it breaths in, the faster its pistons pump and the stronger its winds become. The warmer water not only makes more hurricanes, it make more big ones. The 2005 season had a record 15 hurricanes. Nobody knows how many there will be this season. But it appears that it could be a big year.

Oil continues to gush out of the bottom of the gulf. Some progress has been made to reduce the amount escaping. Oil is washing up on shores and efforts are being made to clean it up. The good news is that most of the oil is confined to coastal areas. The bad news could come if a moderate to large hurricane rides over the spill.

The winds of a hurricane are so strong that the normal interface between ocean and atmosphere disappears. The winds begin to generate large waves. Spray is blown off the top of the waves. That spray mixes with the air so that after a short time there is no real boundary between what is ocean and what is the atmosphere. If a large hurricane moves over the spill, this chaotic mixture of water and air will inevitably also contain oil. The oil will become airborne and travel with the hurricane.

When hurricanes make landfall the winds push the ocean onto the land in what is called a storm surge. The height of the surge on land is dependent on several factors. The strength of the wind and the rate of forward motion of the storm is critical as to how much water is forced up onto the land. The diameter of the hurricane will also determine how much water is blown inland. The wider the storm the more water is pushed in and over a greater area. If the water is shallow offshore, the surge will be deeper on land. Naturally, the elevation of the land is important as well. The water off the gulf coast is shallow. The elevation inland is only a few feet. This area is prime territory for devastating and deeply penetrating storm surges.

Should a major hurricane push the spill towards the gulf coast there will be nothing that can be done to stop it. No amount of planning or engineering will help. No number of visits to the gulf by the president or any other official will stop the inevitable. The storm surge will drive the water and the oil miles inland. Everything in its path will be coated in a greasy bath of crude. Even the wind may have oil in it. In New England, I have seen hurricanes and tropical storms that have blown salt spray many miles inland from the coast. The leaves of the trees eventually turn brown and fall off. In the case of the gulf it will be oil that will spray the trees, buildings and everything else in the way. How far inland this oily mess will blow is anyoneâ€™s guess but it will be unprecedented in its economic and environmental damage.

The recovery period after a hurricane can take years. It was 10 years until some communities fully recovered from Hurricane Andrew in South Florida, some never recovered at all. The New Orleans area is still putting itself back together after Katrina in 2005. The recovery period after an oil-soaked hurricane — or what could be called an Oilicane â€“ is impossible to forecast but it could take years and many billions of dollars. One wonders if BP has the money to survive such a unique disaster. The human and natural losses from such an event could be historic.

This article has been generously contributed by OilPrice.com and was originally published at the Energy Tribune.

Oil Hurricanes May Cause Toxic Rain and Food Security Issues

Oil Rain Killing Crops, Animals – What Will It Do To Humans?

Government Insiders: Get Ready for the Gulf “Dead Zone”