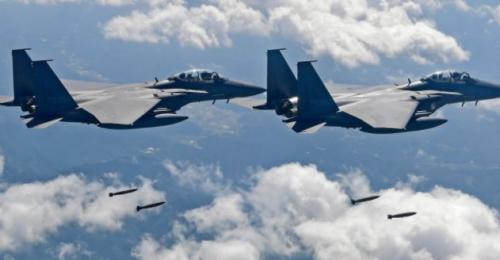 This reported was originally published by Tyler Durden at ZeroHedge.com

US and South Korean officials are nervously watching to see if North Korea follows through with its threats to carry out another nuclear test – or to fire a rumored long-range missile capable of accurately striking the west coast of the US into the Pacific – in celebration of the Oct. 10 anniversary of the Communist Party&rsrsquo;s creation. Meanwhile, the Telegraph reports that South Korea has developed a new weapon to hobble the North’s infrastructure should an armed conflict erupt on the peninsula. Given that it’s almost daybreak in North Korea, such a test could happen as soon as Monday night, Eastern Time.

The weapon is a graphite bomb – otherwise known as a “blackout bomb” – which South Korean officials say will be capable of shutting down North Korea’s entire power grid. Blackout bombs were first used by the US in Iraq in the 1990 Gulf War and work by releasing a cloud of extremely fine, chemically treated carbon filaments over electrical components. The filaments are so fine that they act like a cloud, but cause short circuits in electrical equipment.

As News.com.au points out, North Korea tends to celebrate the Oct. 10 holiday with military parades and aggressive rhetoric. But this year’s festivities could include new provocative weapons tests.

“The Kim regime usually uses these sorts of occasions to demonstrate some show of strength — in this current climate a missile test is a likely result,” says Dr Genevieve Hohnen, lecturer in politics and international relations at Edith Cowan University.

The Telegraph reports that the South developed the bomb to minimize civilian casualties in the North should a conflict erupt. In a statement to Yonhap, a military official said the South Korean army could assemble a blackout bomb at any time. The weapon was reportedly developed by South Korea’s Agency for Defense Development.

“All technologies for the development of a graphite bomb led by the ADD have been secured. It is in the stage where we can build the bombs anytime,” a military official told Yonhap.

The bomb is often referred to as a “soft bomb” because it only affects targeted electrical power systems.

As the Telegraph explains, the blackout bomb was developed as part of South Korea’s “three pillars” plan for retaliating against the North if it believes a nuclear strike is imminent. Escalating tensions with the North have inspired the South to move its target date for completion forward by three years. The plan was initially slated to be complete by the mid-2020s.

The first two parts of the plan involve detecting – and then intercepting – North Korea missiles. The second part – aptly named the “massive punishment and retaliation plan” involves launching attacks against the country’s leadership, including a plan to assassinate Kim Jong Un.

South Korea is bringing forward the deployment of its “three pillars” of national defence by as much as three years as a result of the growing threat posed by Pyongyang’s nuclear and missile development programmes.

The three-pronged strategy was originally scheduled to be in place by the mid-2020s, but North Korea’s increasingly aggressive and unpredictable behaviour has forced Seoul to revise that timeline.

The Kill Chain programme is designed to detect, identify and intercept incoming missiles in the shortest possible time and operates in conjunction with the Korea Air and Missile Defence system for lower-tier defence against inbound missiles.

The final component of the strategy is the Korea Massive Punishment & Retaliation plan, under which Seoul will launch attacks against leadership targets in North Korea if it detects signs that the regime is planning to use nuclear weapons.

South Korea believes North Korea’s energy grid is outdated and vulnerable, and thus would be incredibly susceptible to a “blackout bomb” attack. Blackout bombs were first used by the US against Iraq in the Gulf War of 1990, when they knocked out about 85 percent of Iraq’s electricity. They were also used by NATO against Serbia in 1999, when it damaged around 70 percent of the country’s electrical supply.

President Donald Trump fired off his latest threatening tweet about North Korea earlier today, reiterating his view that 25 years of US appeasement and billions of dollars in humanitarian aid for the North clearly have not worked. He ended the tweet with yet another vague hint that the US could soon resort to a military strike.

Our country has been unsuccessfully dealing with North Korea for 25 years, giving billions of dollars & getting nothing. Policy didn’t work!

Though the US has rejected North Korea’s claims that Trump’s rhetoric has amounted to a declaration of war, how much longer can the US credibly claim that “all options are on the table” if North Korea continues to provoke the international community with its missile and nuclear tests?