Quarantine and Martial Law Operational Details: “Those Afflicted… Will Be Incarcerated And Isolated Against Their Will” 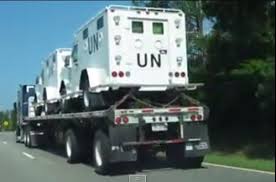