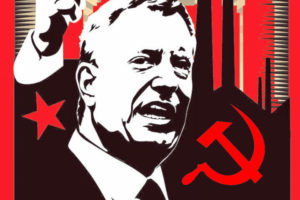 Are there any people even left in New York City to command and rule over? There must be because comrade Bill de Blasio has expanded the “vaccine” mandate for all city workers.

Despite massive pushback against the vaccine mandate imposed on the city’s teachers and public school workers and managers, New York City’s Mayor Bill de Blasio is taking coercive city mandates to the next level Wednesday by announcing that they would be extended city-wide. Starting Wednesday, the mayor is once again attempting a combo of “the carrot and the stick” by requiring some 160,500 city employees to get the COVID-19 vaccine.  Those who comply with the ruling class’s commands will get an extra $500 in their paychecks just for receiving their first shot at a city-run vaccination site.

They will also get a heavy dose of immune deficiency too. Hopefully that $500 is worth it:

Although that benefit will “end at 5 pm on Friday, Oct. 29, by which point city employees are required to have proof of at least one dose, according to an NYC government website.

And for those who refuse: “Unvaccinated employees will be placed on unpaid leave until they show proof of vaccination to their supervisor.”

Already, most city workers had to be vaccinated or tested weekly due to either city or state mandates. Health-care workers in the state and city have all been forced to accept the jab or weekly testing due to a mandate from the state. –ZeroHedge

The mayor told MSNBC in an interview Wednesday morning that his mandate will now expand to “all city agencies, all city workers. It’s time for everyone to get vaccinated,” de Blasio said. “Our public employees are going to lead us out of the Covid era.”

There are only two ways out of this. Elimination of all ruling classes and all power over other people. Or complete compliance with what they want.  It’s too far gone to have any gray areas left.