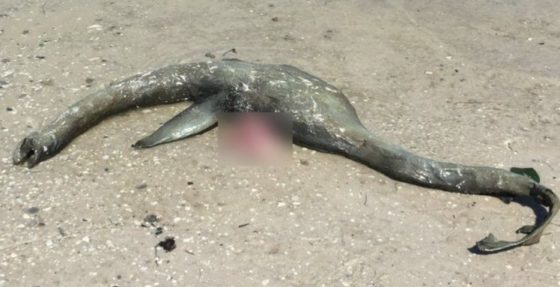 A mysterious and strange looking creature has washed up on a Georgia beach. The animal looks incredibly similar to the infamous and fabled “Loch Ness Monster.”

According to Science Alert, Georgia resident Jeff Warren stumbled across the remains of the creature while boating with his son at Wolf Island National Wildlife Refuge in Golden Isles, Georgia. Warren said he originally assumed the creature was a dead seal. But upon closer inspection, he realized it was something much more strange.

Many on social media have stated that they too believe the creature looks like “Nessie,” the nickname given to the Loch Ness Monster. The first recorded sighting of the Loch Ness Monster was in the year 565 AD when it was said to have snatched up and eaten a local farmer, before being forced back into the waters by St. Columba. Over the years, rumors spread about the “strange events” at Loch Ness. Some believe that ancient Scottish myths about water creatures, like Kelpies and the Each Uisge (meaning “water horse”), contributed to the notion of a creature living in the depths of Loch Ness.

There is already a long-standing local legend about the existence of “Altie” or “Altahamaha-ha” which is basically Georgia’s own version of the Loch Ness Monster.

But this isn’t the first (or second) time that a weird “mystery” creature has washed up on a random beach, and so far scientists say they have always gone on to identify the creature or come up with a perfectly reasonable explanation. Recently, a fanged “monster” appeared on a beach after Hurricane Harvey. But that thing turned out to be an eel.

Scientists also say decomposing animals can often bear strange features, making them look like something that’s never been seen before.

Curiosity is winning right now, however, as many want to know what it is that could possibly look like Nessie.