Most Americans Are Too Broke To Survive an Economic Crisis: “Out Of Cash Almost Immediately” 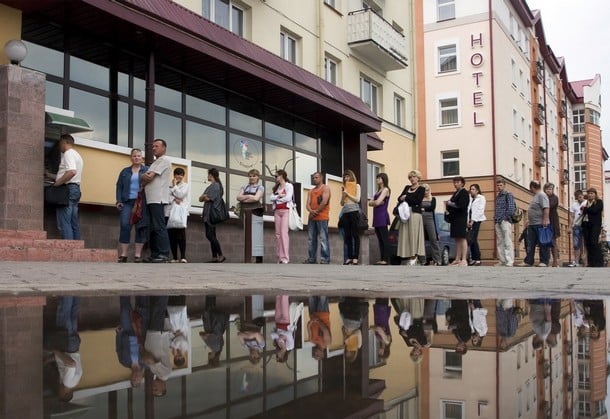 Editor’s Comment: Many people around the world are financially quite poor; but few people will be as bad off as Americans, who have spent most of the post-war years living in a bubble of false security. High on debt, and subsidized by the supremacy of the U.S. petrodollar, hundreds of millions of Americans are in for a rude awakening and a very tough aftermath if/when the system collapses economically.

Living paycheck to paycheck, with many dependent directly on government for handouts, the people in the United States may prove to be the least prepared, and most poorly adjusted to instability and income loss of any people in the world. Where they don’t have plenty, they also don’t have the false illusion of wealth. But here at home, it will surely hurt a lot.

Did you know that almost 70 percent of the U.S. population is essentially living paycheck to paycheck?  As you will see below, a brand new survey has found that 69 percent of all Americans have less than $1,000 in savings.  Of course one of the primary reasons for this is that most of us are absolutely drowning in debt.  In fact, the total amount of household debt in the United States now exceeds 12 trillion dollars.  So many Americans are so busy just trying to pay off their existing debts that they can’t even think about saving anything for the future.  If economic conditions remain relatively stable, the fact that so many of us are living on the edge probably won’t kill us.  But the moment the economy plunges into another 2008-style crisis (or worse), we could be facing a situation where two-thirds of the country is in imminent danger of running out of cash.

If you are living paycheck to paycheck, you live under the constant threat of your life being totally turned upside down if that paycheck ever goes away.  During the last crisis, millions of Americans lost their jobs very rapidly, and because so many of them were living paycheck to paycheck all of a sudden large numbers of people couldn’t pay their mortgages.  As a result, multitudes of American families went through the extremely painful process of foreclosure.

Unfortunately, it appears that we have not learned anything from the last go around.  According to the brand new survey that I mentioned above, 69 percent of all Americans have less than $1,000 in savings…

Last year, GoBankingRates surveyed more than 5,000 Americans only to uncover that 62% of them had less than $1,000 in savings. Last month GoBankingRates again posed the question to Americans of how much they had in their savings account, only this time it asked 7,052 people. The result? Nearly seven in 10 Americans (69%) had less than $1,000 in their savings account.

Perhaps the most alarming fact from this survey is that 62 percent of all Americans had less than $1,000 in savings last year.  So that means that this number has gotten 7 percent worse over the last 12 months.

How did that happen?  I thought the mainstream media was telling us that the economy was getting better…

Look, if you don’t have an emergency fund you are in danger of losing everything.  This is a point that I have been making over and over again for years, and in an article about this new survey USA Today made this point very strongly as well…

This data is particularly worrisome since the recommendation is for Americans to have six months in expenses saved in case of an emergency, such as a large medical expense, car repair bill, or losing your job. Without this emergency fund to fall back on, millions of Americans could be risking financial disaster.

As the publisher of The Economic Collapse Blog, people are constantly asking me what they should do to get prepared for what is coming.

The number one thing that I always suggest is to build up an emergency fund.

In a chaotic situation it is always hard to anticipate accurately what is going to happen, but without a doubt we are all going to need to continue to pay our bills and to buy things for our families during the next crisis.

Yes, someday the U.S. dollar will become rather worthless, but until that happens you are going to need to continue to put a roof over the heads of your family and to put food on the table.

And you are going to need money to do those things.

Some time ago, the Federal Reserve also found that a large percentage of Americans are living on the edge of financial disaster.  They discovered that 47 percent of all Americans could not even come up with $400 to pay for an unexpected emergency room visit without borrowing the money or selling something that they own.

If you can’t even come up with $400 you are really hurting, but that is the status of about half the country these days.

We are continually being told that the economy is strong, but that is simply not the truth.

In fact, it turns out that the period from 2005 to 2015 was the worst period for per capita real GDP growth in modern American history.  The following comes from Zero Hedge…

And as I repeat over and over, Barack Obama is on track to be the one and only president in all of American history to never have a single year when the economy grew by at least 3 percent, and he has had eight years to try to accomplish that feat.

Why doesn’t Donald Trump ever bring up that amazing fact?  I would think that he could get a lot of mileage out of that number.

At this point, nobody can deny that the middle class is shrinking.  61 percent of all Americans lived in middle class households in 1971, but now the middle class makes up a minority of the population for the very first time in our history.

Back in 1970, the middle class brought home approximately 62 percent of all income, but today that figure has plummeted to just 43 percent.

Those that are still doing well often dismiss those that are struggling by barking out such phrases as “get a job”, but the truth is that getting a good job is not so easy these days.

And just because you do have a job does not mean that everything is okay.  As I have discussed previously, 51 percent of all U.S. workers make less than $30,000 a year according to the Social Security Administration.

Everywhere you look things seem to be getting worse and not better.  Not too long ago I documented the explosion of tent cities all over the country as poverty continues to rise, and I discussed how one study found that some young women in our impoverished inner cities are so desperate that they are actually trading sex for food.

Sadly, it isn’t just a few hard cases that we are talking about.  Even in areas of the country that are supposed to be “doing well” we are seeing record-setting poverty numbers.  For example, it was recently reported that the number of New Yorkers sleeping in homeless shelters just set a brand new all-time high, and the number of New York families permanently living in homeless shelters is up 60 percent over the past five years.

If things are this bad during an “economic recovery”, what are they going to look like once the economy really starts imploding?

And considering the fact that almost 70 percent of the population has virtually no savings, could our nation handle an extended economic downturn that may be even worse than what we experienced in 2008 and 2009?

As a nation we truly are living on the edge, and it isn’t going to take very much at all to push us into oblivion.