‘Mental’ People Reported by Family Will Be Forced to “Have a Time Out, Surrender Their Weapons” 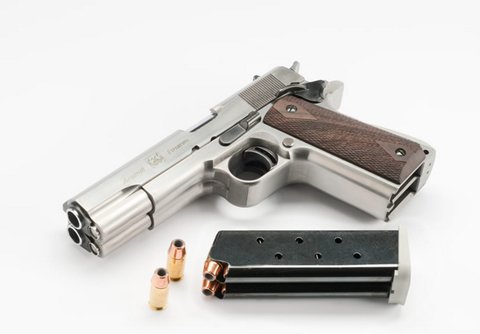 Careful not to seem too angry next time you argue with your spouse. It could spell the end of your 2nd Amendment.

A California law requiring a ‘temporary’ 21-day gun confiscation of those believed to be potentially violent or mentally unstable will take effect January 1st. President Obama has pushed for similar measures nationwide.

The seized weapons will be returned only if the disarmed individual can pass a mental health screening and obtain a judge’s approval.

Gun control legislation going into effect in California next week will allow authorities to seize a person’s weapons for 21 days if a judge determines there is potential for violence.

Proposed in the wake of a deadly May 2014 shooting rampage by Elliot Rodger, the bill provides family members with a means of having an emergency “gun violence restraining order” imposed against a loved one if they can convince a judge that this person’s possession of a firearm “poses an immediate and present danger of causing personal injury to himself, herself or another by having in his or her custody or control.”

“The law gives us a vehicle to cause the person to surrender their weapons, to have a time out, if you will,” Los Angeles Police Department Assistant Chief Michael Moore told a local NPR affiliate. “It allows further examination of the person’s mental state.”

As you might have guessed, this will further marry the relationship between gun ownership and mental health – a major focus of President Obama’s 23 executive orders on gun control that were issued in the wake of the Sandy Hook school shooting.

Getting branded as a mental case, a basket case, violent or potentially violent individual, an alcoholic, an anger management case or a host of other labels will increasingly be used to suspend the constitutional right to bear arms.

Also in the crosshairs will be millions of elderly gun owners who may be considered no longer “mentally capable” of managing their own affairs. It wouldn’t take much for dissidents, conspiracy theorists and certified cranks to be labeled crazy, and ineligible for gun ownership, either.

One of the first big groups this could affect are returning veterans, many of whom are dealing with PTSD and other issues. After fighting for our country, and being highly trained in firearms, veterans may find themselves disenfranchised as a result of issues stemming from their service!

Mental Health Screenings: An End Run Around the 2nd Amendment

Sadly, opportunistic gun control has been the M.O. of the Obama Administration – a tactic that former White House Chief of Staff Rahm Emanuel dubbed ‘never letting a good crisis go to waste.’

Though the San Bernardino attacks are fresh on the minds of gun control-friendly California, this new law  was pushed through in the wake of the Elliot Rodger’s killing spree, who killed six and wounded 11 others supposedly because he couldn’t get a date.

Perhaps these laws and policies will filter out a few bad apples who may otherwise carry out violent acts, but many more will be unduly violated as a result of preemptive restrictions.

But the authorities in California are insisting that rights will not be suspended without due process.

“It’s a short duration and it allows for due process,” he said. “It’s an opportunity for mental health professionals to provide an analysis of a person’s mental state.”

Twenty months later, implementation of the bill is expected to give family members a mechanism for having loved ones briefly lose access to their own, legally acquired weapons in hopes of stopping similar rampages.

“It’s the family members, it’s the people closest to the perpetrator, who are in the best position to notice red flags,” Wendy Patrick, a San Diego State University professor and lawyer, told San Diego’s CBS affiliate this week.

He-said/she-said accusations, snitching and reporting to police, whether justified or not, will become the only justification needed for confiscating guns. Courts may even be required to take guns from ALL individuals reported as a precaution, even in flimsy cases based on unjustified reports.

Cases of gun confiscation are likely to be triggered frequently by domestic arguments, but will branch out to other “red flag” identifiers including threatening speech posted on social media and, in turn, trolled by law enforcement. The potential for abuse is also ripe.

The gun grabbers will try to spread this law to other states, too, and meanwhile use the mandatory ObamaCare system to snare more and more law abiding gun owners under labels and diagnoses of mental health.

Once you make that list, you can count on law enforcement coming door-to-door to disarm you – on the basis of keeping your and your loved ones safe from you!

Couple that with the No Fly, No Buy terror watch lists Obama will use to bar guns, too, and you’ve got a gun ban based on a whisper campaign and a black list. Somehow it doesn’t smell like freedom.