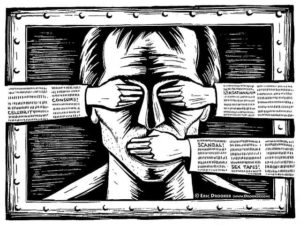 Since the COVID-19 pandemic began, this publication has provided ample documentation and evidence that the globalist elites are using to fundamentally alter Western democracies in ways they never could legislatively.

One way has been to use the virus as a means of curbing civil liberties and constitutionally protected freedoms to limit individualist activity and force conformity, as evidenced by vaccine mandates, forced business lockdowns, and closures, masking requirements, and other measures.

But another way the globalist elite are changing our societies using the virus as their impetus is through the employment of propaganda and censorship, as evidenced by a recent incident involving a researcher who was attempting to document adverse reactions to COVID-19 vaccines.

Jessica Rose didn’t ask for any of this. She started to analyze data on adverse reactions after COVID-19 vaccines simply as an exercise to master a new piece of software. But she couldn’t ignore what she saw and decided to publish the results of her analysis. The next thing she knew, she was in a “bizzarro world,” she told The Epoch Times.

A paper she co-authored based on her analysis was withdrawn by the academic journal Elsevier under circumstances that raised eyebrows among her colleagues. The journal declined to comment on the matter.

Mind you, Rose isn’t an amateur or a conspiracy theorist; she received a Ph.D. in computational biology from Bar-Ilan University in Israel, and upon completion of her post-doctoral studies on molecular dynamics of certain proteins, she wanted to take on something new.

To that end, she switched to a new statistical computing software in a bid to discover a new and interesting data set she could use to hone her skills, settling on the Vaccine Adverse Event Reporting System (VAERS) in the U.S., which is a database containing reports of problems that have occurred with certain vaccines that may or may not have been caused by the jab.

She went into the project with a clear mind, not a predetermined outcome, saying, “I don’t go in with questions.”

But what she discovered disturbed her, she said.

The reporting system has been around since 1990 and was actually established to be an early warning apparatus for problematic vaccines. Anyone can submit reports, but they are then checked for duplicates and accuracy. Mostly though, the reports are filed by health professionals; most commonly, there are roughly 40,000 reports per year and several hundred deaths involving vaccines.

However, after COVID vaccines were introduced, reports skyrocketed. By Jan. 7, there were more than 1 million reports including around 21,000 deaths. Other notable conditions and reactions reported include: 11,000 heart attacks; almost 13,000 Bell’s palsy cases; and more than 25,000 instances of myocarditis (inflammation of the heart muscle itself) or pericarditis (inflammation of the pericardial sac around the heart).

In discovering the data, Rose said it was alarming to her, but worse, she found, some experts were essentially dismissing the alarming findings.

“Clearly, there’s no concern [among these authorities and experts] for people who are suffering adverse events,” she said, according to The Epoch Times.

The most common pushback on the VAERS data regarding COVID-19 vaccines is that the reports are unreliable and unverified, but Rose said those arguments miss the point since VAERS was never set up to provide definitive answers about problems regarding vaccines — only to provide officials and policymakers with an early warning system. And that’s what’s happening with the COVID-19 vaccines, she says.

“It’s emitting so many safety signals and they’re being ignored,” she said.

She decided to team up with Dr. Peter McCullough, an internist, cardiologist, and epidemiologist, to write a paper on VAERS reports of myocarditis occurring in youth, an issue with COVID vaccines that has already been acknowledged but only as a ‘rare’ occurrence (it isn’t).

As of July 9, 2021, the researchers discovered 559 VAERS reports of myocarditis, 97 of which involved children ages 12-15, and while it’s not clear how many of those are directly related to the vaccine, it was obvious to the researchers that the COVID jabs cannot be discounted.

“Within 8 weeks of the public offering of COVID-19 products to the 12–15-year-old age group, we found 19 times the expected number of myocarditis cases in the vaccination volunteers over background myocarditis rates for this age group,” the paper said.

However, “after two weeks, on Oct. 15, the paper disappeared from the Elsevier website, replaced by a notice of ‘Temporary Removal.’ Not only weren’t the authors told why, they weren’t informed at all, according to Rose,” The Epoch Times reports.

“It’s unprecedented in the eyes of all of my colleagues,” she said.

It’s obvious why the paper was pulled: The global elite has decided it is heresy because it reveals truths about the COVID vaccines they don’t want the public to know.

Our Western democracies are being subverted by Marxist counter-revolutionaries bent on enslaving the planet.