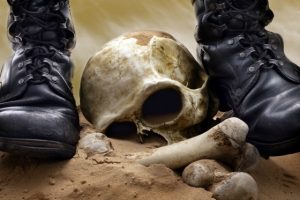 Life insurance companies are sounding the alarm on the excessive death toll in the United States in the aftermath of the vaccine rollout. Based on the math, there are about 93,000 excess deaths each month since the COVID shots have been on the market.

Of course, the mainstream media isn’t going to tell anyone this. Banned and censored doctor Robert Malone says these shots are creating a “mass casualty event.” Mike Adams of Natural News says this is a red alert situation and it’s unfolding right in front of us. The human race is being slaughtered through the injection of “clot shots” that are deliberately designed to reduce the global population through death and infertility. All the politicians, scientists, regulators, and journalists who are in on this are committing genocidal crimes against humanity, and they are even targeting children.

Other reports continue to come in showing micro-routers and other technology laced into the vaccines that are invisible until the water and hydrogel dry up.

An article published by The Center Square (Indiana) reveals how Scott Davison, CEO of OneAmerica (a life insurance company) is sounding the alarm over a 40% increase in total deaths among Americans aged 18 to 64 (i.e. working-aged Americans):

“We are seeing, right now, the highest death rates we have seen in the history of this business – not just at OneAmerica,” the company’s CEO Scott Davison said during an online news conference this week. “The data is consistent across every player in that business.”

Davison said the increase in deaths represents “huge, huge numbers,” and that’s it’s not elderly people who are dying, but “primarily working-age people 18 to 64” who are the employees of companies that have group life insurance plans through OneAmerica.

“And what we saw just in the third quarter, we’re seeing it continue into the fourth quarter, is that death rates are up 40% over what they were pre-pandemic,” he said. -Natural News

Natural News proceeded with completing the math for us, which is something alternative media has to do since the mainstream media cannot be bothered with anything that doesn’t force the enslavement of humanity:

According to IndexMundi.com, there are normally about 7,755 deaths per day in the USA, pre-covid. The 40% increase in mortality now being seen by life insurance companies, if applied across all age groups, would mean an additional 3,100 deaths per day.

Multiply that by 30 days and you get over 93,000 excess deaths per month in the USA.

Remember, this is based on third-quarter data from 2020, yet we know that vaccines cause an immune system failure to worsen over time. This means fourth-quarter data will be even worse, and the Q1 2022 data will likely be worse still. In addition, we have cancer deaths starting to skyrocket due to spike protein interference with chromosomal damage repair mechanisms, which is why I’m predicting we will see over 1 million cancer deaths in calendar 2022, which is roughly a doubling of the usual cancer death statistics. –Natural News

Research, read, and be aware. Do not take anything for truth without looking into it yourself. Come to your own conclusions.  That’s the biggest threat to any master or ruler. They don’t fear anything other than people’s defiance.