Liberal Preppers Ready for Trumpocalypse: “Tired Of Being Seen As Wusses Who Won’t Survive SHTF” 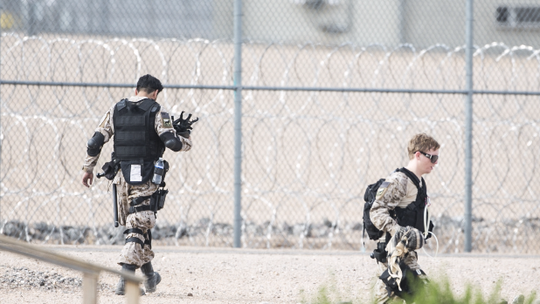 What will Donald Trump’s presidency mean for liberty? Only time will tell.

Over the years, it seems that the world has tilted towards extremes from one side to the other, through left and right arms of the larger system of government.

During both Republican and Democratic presidents, there have been wars, riots, disasters and protests, as well as covert black op missions, plans for emergency camps for mass populations, threats of disaster and world war, and scandals; and there have been attempts to disarm the population, reign in militia members and to criminalize homesteading, homeschooling, black market and cash transactions, federalize state business, and undermine individual sovereignty at every level. There is constant and increasing surveillance.

In the name of public safety, nearly any health emergency can prompt mandatory quarantine, door-to-door sweeps and forced vaccinations. Major natural disasters and terrorist incidents (particularly the Boston Marathon bombing) now regularly prompt martial law in the regional footprint surrounding the area. Most public events are kept under armed guard; highway checkpoints are common and put up with, TSA are entrenched, Homeland Security has unchecked powers at every level.

From Nixon’s destruction of the gold standard, to Carter’s government rationing powers during the oil crisis, to Rex 84 internment camp plans and Iran Contra under Regan and Bush, Ruby Ridge, Waco and Oklahoma City under Bush and Clinton, and the War on Terror under Bush II and Obama, there have been incredibly significant attacks on personal liberty.

The threat has little to do with the public personas of the presidents themselves, but more to do with the crisis that they face. 9/11 opened the door to a police state, and the institution of a permanent surveillance state.

What kind of crisis will President Trump face? How will he respond?

When/if President Trump faces a major crisis, there is no reason to think it will bring anything but even more tyranny, instituted in the deep state itself. Depending upon the situation, the response could be quite harsh.

The threat of martial law has once again become very real.

And in an interesting twist, this is creating a new drive in many worrisome liberals – to prep for the Trump administration – campaign rhetoric about rounding up illegal immigrants, and creating new domestic surveillance and registration programs for Muslims along create scary visions… and that’s before taking into account the threat of economic collapse.

While many conservative and libertarian-minded preppers may not agree AT ALL on their previous support for Hillary Clinton, or their anger and hate of Trump, they have to concede that a new wave of “liberal preppers” may be quite right in preparing for the likelihood of collapse or martial law in the years ahead. The potential for government overreach or rebellion among the population is very high in the next four years… it is only a matter of waiting for the pretext of crisis.

With Trump now days away from assuming the White House, Waugh’s preparing for the worst. He’s made “bug-out bags” stuffed with ammo, energy bars, and assorted survival gear for his wife and their three cats. He’s begun stowing water and browsing real estate listings in Gunnison County, Colorado, which he’s determined to be a “liberal safe-haven.” Last month, Waugh added a 9mm handgun to his arsenal.

“I kept asking myself, ‘Do I want to live under tyranny?’” said Waugh, who supported Bernie Sanders in the Democratic primary and later backed Hillary Clinton. “The answer was absolutely not.”

“We’re tired of being perceived as wusses who won’t survive when shit hits the fan,” said Stacy, a Texas Democrat who recently caught the prepper bug. She spoke with Vocativ on the condition we not publish her last name. “I, for one, don’t like to be thought of as some precious snowflake.”

After years cast as a fringe survival group, preppers entered a kind of golden age during the Obama presidency. A horrific housing crash and the spectacle of Hurricane Sandy helped give rise to reality television shows like Doomsday Preppers and Doomsday Bunker, and fueled a multi-billion dollar survival industry. Branded by some as a foreign-born, gun-grabbing socialist, Obama aroused deep suspicion among the patriot groups, right-wing conservatives, and apocalyptic Christians at the center of the growing movement.

Trump’s provocative posturing and unpredictability is now inspiring a fresh wave of panic on the left. Those who spoke with Vocativ have envisioned scenarios that could lead to military coups led by loyalists of the president-elect and internment camps packed with political opponents, bloody social unrest and an all-out civil or nuclear war. Sound bonkers? Perhaps. But, for many, so was the prospect of a President Trump.

“With the new administration I worry about Nazi-style camps that would include my wife, our twins and myself,” said Melissa Letos… she raises chickens, strives to keep a year’s supply of canned food, and is able to hold her own with a firearm. She and her family plan to a build a bunker-style basement in the future.

As he prepares to assume the office that he was elected to, there is every reason to think that President Trump will be tested, perhaps immediately, during his first term. As he wields enormous powers, one can only hope that he understands, or cares about, the repercussions that will be felt underneath.

Dealing with terrorism, keeping tabs on Muslims immigrants, increasing checks at the border, and attempting mass deportation could all cause a violent and oppressive backlash. One of the great questions of the Trump Administration will be the one of whether the tail wags the dog. President Trump is the face of a vast and powerful government, from the National Security cabinet, Pentagon and intelligence agencies, think tanks and beyond.

Back in the 1980s, when the Rex 84 martial law contingency plans were exposed in Congressional hearings, the details of which not even Congress is allowed to see, it emerged that the plan for building detention centers to house millions of people was based on the prospect of having to house huge numbers of people facing deportation under an influx of immigration from Mexico and the South.

Just beneath the surface, this or any major crisis, also gives the pretext for taking up emergency powers, and gives both the justification and the physical infrastructure necessary for also rounding up dissidents, opposition leaders, and other individuals marked as undesirable or untrustworthy.

Along with many other damning pieces of paper during his time in office, President Obama signed executive order 13603, granting enormous leeway to federal government agencies during a crisis.
Practically any emergency could give dozens of agencies the power to seize your resources, block off your movements, and lock you up for your own safety. As Forbes summarized:

The most ominous sign of possible things to come appeared on March 16, 2012, when President Obama signed executive order 13603 about “National Defense Resources Preparedness.”

This 10-page document is a blueprint for a federal takeover of the economy… Specifically, Obama’s plan involves seizing control of:

*  “All forms of civil transportation”

*  “All usable water from all sources”

It has continually happening during both liberal and conservative political climates. The danger is ever present.

Preparing is the least we can do, regardless of philosophy.

The Six Laws of Survival: Strategies For Beating the Worst Case Scenario
12 Bad Strategies That Will Get Preppers Killed

Don’t Be Without These Prepping Essentials: “Survival Fuel You Must Have”