It’s Not Over: Government Plans for the Worst: Forced Evacuation of Tokyo 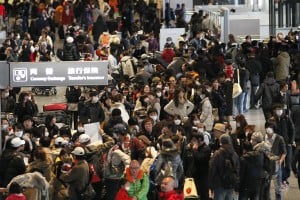 While it has for the most part disappeared from mainstream view, the Fukushima nuclear disaster is anything but over. In fact, the situation in Japan has gone from bad to worse.

Bottom line: There is no way to contain the radiation.

Even more alarming is that the U.S. Nuclear Regulatory Commission (NRC) and other agencies have warned that the nuclear storage pools (the containment units that are being used to cool the nuclear fuel) have been damaged and may collapse under their own weight.

Such an event would cause widespread nuclear fallout throughout the region and force the government to evacuate the nearly 10 million residents of Tokyo and surrounding areas, a scenario which government emergency planners are now taking into serious consideration.

One of the biggest issues that we face is the possibility that the spent nuclear fuel pool of the No. 4 reactor at the stricken Fukushima No. 1 Nuclear Power Plant will collapse. This is something that experts from both within and outside Japan have pointed out since the massive quake struck. TEPCO, meanwhile, says that the situation is under control. However, not only independent experts, but also sources within the government say that it’s a grave concern.

The storage pool in the No. 4 reactor building has a total of 1,535 fuel rods, or 460 tons of nuclear fuel, in it. The 7-story building itself has suffered great damage, with the storage pool barely intact on the building’s third and fourth floors. The roof has been blown away. If the storage pool breaks and runs dry, the nuclear fuel inside will overheat and explode, causing a massive amount of radioactive substances to spread over a wide area. Both the U.S. Nuclear Regulatory Commission (NRC) and French nuclear energy company Areva have warned about this risk.

A report released in February by the Independent Investigation Commission on the Fukushima Daiichi Nuclear Accident stated that the storage pool of the plant’s No. 4 reactor has clearly been shown to be “the weakest link” in the parallel, chain-reaction crises of the nuclear disaster. The worse-case scenario drawn up by the government includes not only the collapse of the No. 4 reactor pool, but the disintegration of spent fuel rods from all the plant’s other reactors. If this were to happen, residents in the Tokyo metropolitan area would be forced to evacuate.

Former Minister of Land, Infrastructure, Transport and Tourism Sumio Mabuchi, who was appointed to the post of then Prime Minister Naoto Kan’s advisor on the nuclear disaster immediately after its outbreak, proposed the injection of concrete from below the No. 4 reactor to the bottom of the storage pool, Chernobyl-style. An inspection of the pool floor, however, led TEPCO to conclude that the pool was strong enough without additional concrete. The plans were scrapped, and antiseismic reinforcements were made to the reactor building instead.

There was a chance early on that a storage pool collapse could be prevented, but according to the report Tokyo Electric Power Co. refused to take the necessary steps as a cost-cutting measure.

Now, as radiation fallout envelops the entire northern hemisphere, there is a distinct possibility that the crisis will move into an even more critical and dangerous phase.

When news of the disaster first emerged we warned, contrary to mainstream experts, that it could be much worse than the Chernobyl accident of the 1980’s, that no containment would be possible for at least a few years, and radiation levels across North America would sky rocket. A year on, we are seeing adverse impacts on ocean water throughout the Pacific, and ground levels of radioactive contaminants are well beyond safety thresholds for potable water, food, and soil.

With the Japanese economy already on the brink of meltdown and the rest of the world drowning in debt, an escalation in the severity of the disaster in Japan could be the last nail in the coffin for world financial markets and economic growth.

Even worse, if storage pools in the No. 4 reactor collapse and disintegrate as the US Nuclear Regulatory Commission has warned could happen, we will see a humanitarian crisis of unprecedented scale as millions of refugees will have no choice but to flee Tokyo. They’ll have no possessions, no money, no food, no water, no shelter, and a very fragile safety net.

This is what SHTF looks like. The government lies. The corporate cover ups. Downplaying of the severity of the crisis. And then… panic.