Hillary Finally Concedes: “This Is Painful and It Will Be for a Long Time” 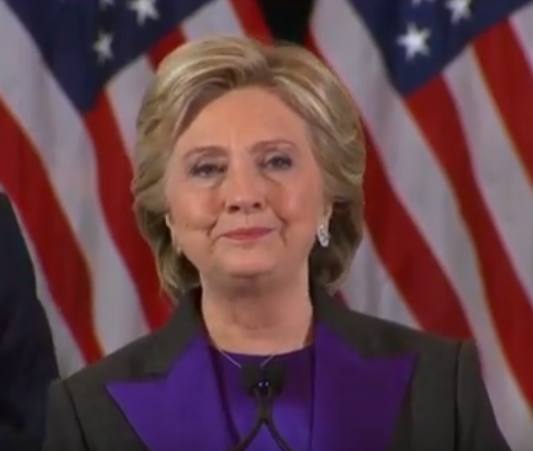 After what appeared to be a refusal to concede late last night (via John Podesta), followed by Trump’s victory speech, in which he referred to a concession call by his opponent, Hillary Clinton finally issued her concession speech at around 11:30 AM Eastern time.

The tone was clearly bitter, though it was cloaked in the hopeful language of continued efforts.

After questions about whether or not Donald Trump would have the wherewithal to admit defeat and accept election results, it turned out to be Hillary who had apparent difficulty in giving up.

SEE: Is Something Wrong With Hillary? Will NOT Concede Tonight – Refuses To Speak To Crowd – Health Episode?

But reality set in, and she went on stage, albeit more than an hour after she was scheduled to do so, to admit her loss.

She played to what might have been her largest and most enthusiastic crowd to date on the 2016 campaign trail.

Thank you so very much for being here. I love you all, too. Last night I congratulated Donald Trump and offered to work with him on behalf of our country.

I hope that he will be a successful president for all Americans. This is not the outcome we wanted or we worked so hard for, and I’m sorry we did not win this election for the values we share and the vision we hold for our country.

But I feel pride and gratitude for this wonderful campaign that we built together. This vast diverse creative unruly energized campaign. You represent the best of America and being your candidate has been one of the greatest honors of my life.

I know how disappointed you feel because I feel it, too. And so do tens of millions of Americans who invested their hopes and dreams in this effort. This is painful, and it will be for a long time. But I want you to remember this.

Our campaign was never about one person, or even one election. It was about the country we love and building an America that is hopeful, inclusive, and big-hearted. We have seen that our nation is more deeply divided than we thought. But I still believe in America, and I always will. And if you do, then we must accept this result and then look to the future. Donald Trump is going to be our president. We owe him an open mind and the chance to lead. Our constitutional democracy enshrines the peaceful transfer of power.

To anyone that sent contributions, even as small as $5, that kept us going, thank you. To all of us, and to the young people in particular, I hope you will hear this — I have, as Tim said, I have spent my entire life fighting for what I believe in.

This loss hurts, but please never stop believing that fighting for what’s right is worth it.

And so we need — we need you to keep up these fights now and for the rest of your lives. And to all the women, and especially the young women, who put their faith in this campaign and in me: I want you to know that nothing has made me prouder than to be your champion.

Now, I know we have still not shattered that highest and hardest glass ceiling, but someday someone will — and hopefully sooner than we might think right now. [Cheers and applause]

And to all of the little girls who are watching this, never doubt that you are valuable and powerful and deserving of every chance and opportunity in the world to pursue and achieve your own dreams. [Cheers and applause]