Government Officials Warn: Breakdown In Diplomacy With North Korea Is A Fast Track To War 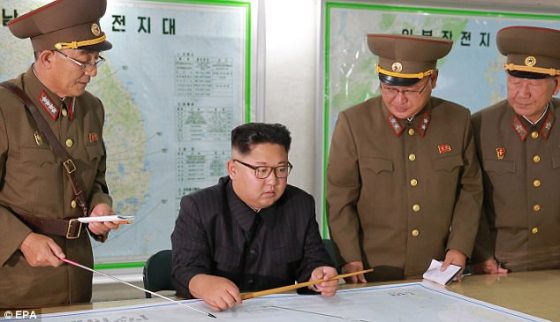 Government officials are worried that a new breakdown in talks with North Korea could trigger a war. With heated rhetoric taking the stage instead of diplomacy, it could only be a matter of time before the anger hits a boiling point.

Joseph Yun, a top American diplomat to North Korea, has been warning of the breakdown in meetings on Capitol Hill and seeking help to persuade the administration to prioritize diplomacy over the heated rhetoric that appears to be pushing the two nuclear powers closer toward conflict, sources familiar with the discussions told NBC News. Diplomatic efforts between the United States and North Korea are in peril with Pyongyang shunning talks in response to President Donald Trump’s increased public attacks on Kim Jong Un, according to multiple U.S. government and congressional officials. Yun claims the White House has “handicapped” the chances of diplomacy.

As Trump prepares for his first official trip to Asia next month, the tensions between the U.S. and North Korea continue to tighten. The government officials sounding the alarm also explain some of the worrisome comments that have been made by Republican and Democratic Senators in recent weeks, most notable Foreign Relations Committee chair Sen. Bob Corker who has said repeatedly that the president is undercutting diplomatic efforts.

“When you kneecap that effort you really move our country into a binary choice which could lead to a world war. So yes, I want him to support diplomatic efforts, not embarrass and really malign efforts that are underway,” Corker said on NBC’s TODAY  on Tuesday.

Not many actually believe that Trump will be ordering a preemptive strike on North Korea, but a lack of communication between the two countries or through Chinese channels increases the chances of miscommunication, which would inevitably lead to further escalation of already bowstring tight tensions. Yun’s diplomatic efforts are on their “last legs,” one U.S. official said, adding that Yun is frustrated by an inability to communicate the urgency of the diplomatic situation to the White House.

“It is not so much that North Korea is shutting down, it’s that the message from the U.S. government is, ‘surrender without a fight or surrender with a fight,’” a separate U.S. official told NBC News. North Korea feels backed into a corner and with a fascist leader with self-control issues like Kim Jong-Un at the helm, the choice could easily be to fight.

Yun was not available to comment, but East Asian and Pacific Affairs Bureau spokesman Justin Higgins told NBC News: “We can’t comment on allegations from anonymous sources. What I can say is that Ambassador Yun has been faithfully executing the Trump administration’s North Korea policy since Jan. 20, including his trip to North Korea at the president’s direction to bring American citizen Otto Warmbier back to the United States after a year in captivity.” The White House did not respond to a request for comment.

CIA Director Mike Pompeo said last week that North Korea is only months away from perfecting its nuclear weapons capabilities. “They are close enough now in their capabilities that from a U.S. policy perspective we ought to behave as if we are on the cusp of them achieving” their objective of being able to strike the United States.