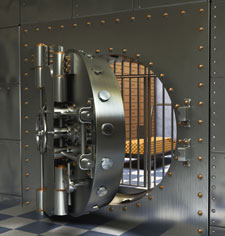 Every share in gold is supposed to represent a certain amount of physical gold in storage, and be available on demand.

But that’s not what happened when a customer asked for their gold at Deutsche Bank, the largest German bank participating in the gold exchange; instead, the bank officially refused physical delivery of gold after a request, stating a vague change in “business policy.”

Is the real reason that such a request was refused that a surge of investors seeking a safe haven during a period of currency collapse has strained the bank’s meager deposits, and they don’t want to admit how short the position is?

There isn’t nearly enough gold and silver to meet the obligations of everyone holding shares in these important commodities; banks lend out and leverage gold just as they do with other deposits.

If enough people demand physical possession at one time, the bank or institution could be caught with its pants down, and it is possible that this is a case of avoiding that position by simply refusing to even meet that demand.

Clients of Germany’s biggest bank who have invested in the exchange-traded commodity Xetra-Gold are facing problems when they want to obtain physical gold, according to German analytic website Godmode-Trader.de. Xetra-Gold is a bond on the Deutsche Börse commodities market, and Deutsche Bank is a designated sponsor. On the website, Xetra-Gold says its clients have the right for physical delivery of gold.

“Physically backed: The issuer uses the proceeds from the issue of Xetra-Gold to purchase gold. The physical gold is held in custody for the issuer in the Frankfurt vaults of Clearstream Banking AG, a wholly-owned subsidiary of Deutsche Börse. In order to facilitate the delivery of physical gold, the issuer holds a further limited amount of gold on an unallocated weight account with Umicore AG & Co.,” says Xetra-Gold.

However, despite claims that every virtual gram of gold is backed by the same amount of physical gold, clients have been refused the precious metal upon demand.

According to Godmode Trader, its reader “sought physical delivery of his holdings of Xetra-Gold. For this he approached, as instructed by the German Börse document, his principal bank, Deutsche Bank.” However, he was told that “the service” was no longer available for “reasons of business policy“. The article went on to say it’s not yet clear whether other banks are still delivering gold through Xetra.

Xetra-Gold says its holdings amount to over 85 tons of gold. “At the same time, the number of deliveries of physical gold has risen to nearly 900, at a total volume of over 4 tons”, and the assets it manages reach €3.5 billion.

This plays into reports that claim that there is a physical shortage of gold (and silver) and that demands for physical delivery will force major banks and depositories to admit what is an ultimately unavoidable fact: that they are long on promises, and short on deposits.

If banks don’t have the deposits to hand over upon request, it amounts to fraud, and the system is full of enough fraud to collapse on its own weight.

Someday, this will all come to a head, as economic experts have often pointed out:

Similar pressures have been put on the Federal Reserve at the international level, as countries, ironically including Germany, have demanded physical repatriation of their gold.

Germany, Switzerland, the Netherlands, and numerous other countries in Latin America and the Middle East are all demanding the return of their gold. Which countries will be left holding the bag? And which countries will be at the mercy of the accepted value of the offered reserve currency, perhaps in the form an SDR?:

The German’s are demanding that the U.S. return all of the 374 tons of gold held by the Bank of France, and 300 tons of the 1500 tons of bullion held by the New York Federal Reserve.

German repatriation has taken much longer than anticipated… the Fed calmly says they are accommodating their request at a reasonable pace.

The whole system is a fraud, and the facade is starting to crack. If/when the paper money ignites, there will be nothing like holding onto the real thing.

That’s why it may be a wise choice to physically hold gold, and store it in secure locations that you can actually access.