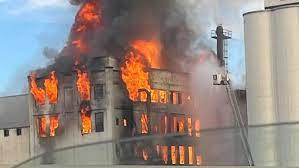 A fire has erupted at a Pendleton, Oregon flour mill. This is just one more fire in a long string of food production or food storage warehouses just this year.

Pendleton Fire Department, Umatilla Tribal Fire Department, and Umatilla County Fire District No. 1 were the first to respond to the scene of the blaze at 501 S.E. Emigrant Ave. Soon after, fire departments from La Grande and Boardman also were responding.

Pendleton Assistant Fire Chief Tony Pierotti said this blaze kicked off at about 4:30 a.m., and all signs point to the massive structure as a total loss, according to a report by the East Oregonian.  Pierotti said silos were at full capacity of finished grain, so the fire fuel load was extreme.

Grain Craft, the third largest flour miller in the United States, owns the mill and employs 22 people there. The company issued this statement:

“Early (Wednesday) morning a fire erupted at the Grain Craft flour mill in Pendleton, Oregon. There have been no injuries reported and our focus remains on the safety and well-being of our team members and the surrounding community. We are supporting all authorities as they contain the fire and mitigate the damage where possible. We are still working to understand the situation, however, everyone is safe, and we will update when we have more information.”

How many coincidences are too many? The food supply chain is under immense stress right now. It won’t take much more to completely wipe out shelves at local grocery stores. One event causing panic and fear in the population will be enough.