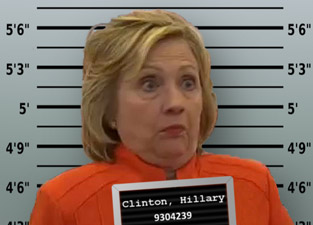 Admittedly, the question is speculative, but not without merit.

During the debates and in the heated final days of the campaign, Donald Trump vowed to assign a special prosecutor to investigate Hillary and send her to jail.

It was easily the highlight of the entire campaign:

So we’re going to get a special prosecutor, and we’re going to look into it, because you know what? People have been — their lives have been destroyed for doing one-fifth of what you’ve done. And it’s a disgrace. And honestly, you ought to be ashamed of yourself. (source)

But, now that victory has set in, and the election is officially over, can anybody expect that he will actually do it?

Certainly, we must wait until he is inaugurated and has a chance to show what kind of president he will be.

However, Trump’s victory speech gives good reason to doubt the prospects for his actually assigning a “special prosecutor” against Hillary Clinton.

He opened the speech with praise for Clinton and a call for unity – certainly a different chord for now-president-elect Trump:

TRUMP: I’ve just received a call from Secretary Clinton. (APPLAUSE) She congratulated us — it’s about us — on our victory, and I congratulated her and her family on a very, very hard-fought campaign. I mean, she — she fought very hard. Hillary has worked very long and very hard over a long period of time, and we owe her a major debt of gratitude for her service to our country.

Now it’s time for America to bind the wounds of division; have to get together. To all Republicans and Democrats and independents across this nation, I say it is time for us to come together as one united people.

Certainly, there is something to be said for being a gracious winner – and for Trump, proving to his critics that he won’t be their worst nightmare.

Pardon, The Price of Concession?

But what really accounts for the shift in tone?

Late in the evening, John Podesta – top aide to Hillary, thoroughly implicated in wickedness by Wikileaks – announced, in essence, that the campaign would not concede, that they would wait until every last vote was counted.

Clearly, Team Hillary was fully prepared to challenge a recount, to take it to court in every venue possible. Al Gore did so (and with good cause), and she could too.

Hillary and her campaign had every opportunity to deny Trump easy victory, even when there was no real chance left for her. They could have drawn things out for some time.

And yet, shortly after Podesta’s announcement, Trump gave his victory speech, noting a call from Hillary Clinton herself in which she conceded – but on what terms?

Though it is admittedly speculative – can anyone else claim to know what was said during that call? – it is entirely possible that the primary demand for her swift admission of defeat was that any and all possibility of prosecution and investigation for her sordid and illegal activities be taken off the table.

Did Hillary make THAT call?

Did Trump essentially grant her immunity from his own special court in exchange for acknowledging the win he otherwise already earned?

Only time will tell.

For her part, Trump campaign manager Kellyanne Conway claimed that the question hasn’t been ruled out, but wasn’t discussed in recent days or during the call with Hillary Clinton:

Trump and Vice President-elect Mike Pence are “looking to unify the country, but we haven’t discussed that in recent days, and I think that it’s all in due time,” campaign manager Kellyanne Conway told MSNBC in an interview, as quoted by Reuters.

But it STILL seems that Hillary knows something that we all do not – because she has said all along that it is not going to happen… that there isn’t even the slightest chance:

So, is she right about that?

What will Trump do in the first 100 days?

Don’t be surprised if campaign rhetoric ends up being just all talk. For Trump supporters who were, above all, opposing Hillary Clinton and urging her being prosecuted and held accountable – don’t hold your breath.

Where Are The Handcuffs? This Video Blows The Doors Open On Hillary’s Corruption, Obfuscations and Outright Lies