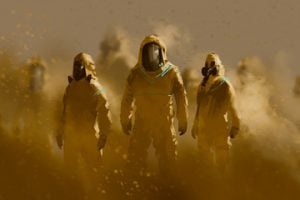 Iraq is going through an outbreak far more severe than the monkeypox. Crimean-Congo Hemorrhagic fever has broken out in the Middle East and the tick-borne illness is deadly in up to two-fifths of people.

According to the World Health Organization, the disease called the Crimean-Congo hemorrhagic fever has claimed 19 deaths among 111 cases this year alone. That means the spread of this disease is “unprecedented.”

“The number of cases recorded is unprecedented,” Haidar Hantouche, a health official in Dhi Qar province told the Associated Free Press as reported by WION News. The surge in cases this year has shocked officials since numbers far exceed recorded cases in the 43 years since the virus was first documented in Iraq in 1979.

The virus causes severe bleeding both internally and externally, with most of the bleeding coming from the nose. In addition to uncontrolled bleeding, the virus causes intense fever and vomiting.

The disease was first found in Crimea in 1944 and given the name Crimean hemorrhagic fever. It was then later recognized in 1969 as the cause of illness in the Congo, thus resulting in the current name of the disease. It is endemic in Africa, Asia, the Middle East, and the Balkans.

“Animals become infected by the bite of infected ticks,” said the WHO. “The CCHF virus is transmitted to people either by tick bites or through contact with infected animal blood or tissues during and immediately after slaughter,” it added. According to the World Health Organization (WHO), CCHF’s fatality rate is between 10 percent and 40 percent.

Since the virus is “primarily transmitted” to people via ticks on livestock, most cases are among farmers, slaughterhouse workers, and veterinarians, the WHO says. “Human-to-human transmission can occur resulting from close contact with the blood, secretions, organs, or other bodily fluids of infected persons,” it adds.

There is no vaccine available, yet we’ve how fast the ruling class can roll one out and get people to take it. And, magically, it’s impacting the food supply, mainly meat production.

The virus has also adversely affected meat consumption in the country, with many butchers saying cattle arriving for slaughter has fallen to half normal levels. “People are afraid of red meat and think it can transmit infection,” said Fares Mansour, Director of Najaf Veterinary Hospital. –WION News

This could be an actual deadly disease, unlike COVID, so keep your eyes on this one. A hemorrhagic fever outbreak would be devastating to the world’s population, especially considering so many have taken the VAIDS shots that have degraded the immune system. Watch and continue to prepare.