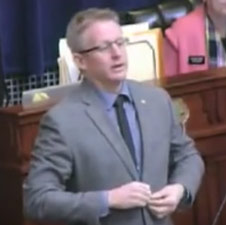 Proving once again that our elected representatives appear to have absolutely no clue, we turn to Democrat Idaho House Minority Leader Mat Erpelding.

The Dunning-Kruger effect is the idea that low-ability people tend to suffer from illusory superiority. The phenomenon, first studied by David Dunning and Justin Kruger, says that people who know the least tend to overvalue their own competence, and tend to believe that they are experiencing some sort of upper-echelon level of thinking.

While the original study was conducted in 1999, we witnessed what appeared to be the Dunning-Kruger effect in action this past Tuesday on the floor of the Idaho House of Representatives.

And while it’s only March, we also have identified the front-runner for our “Aurophobe of the Year” award.  (Aurophobia is the irrational fear of gold.)

During the March 14th floor debate on Idaho’s House Bill 206, a measure that promotes sound money by removing Idaho income taxation from precious metals, Democrat Representative Mat Erpelding — the House Minority Leader — couldn’t help himself and had to share his two cents, even after asserting that he had no opinion on the bill (but then voted against it).

The quote itself is shockingly obtuse and ignorant:

Yes, that actually happened and here’s the video to prove it:

Visit the Sound Money Defense League for news and citizen action focused on restoring gold and silver to its historic role as America’s constitutional money.