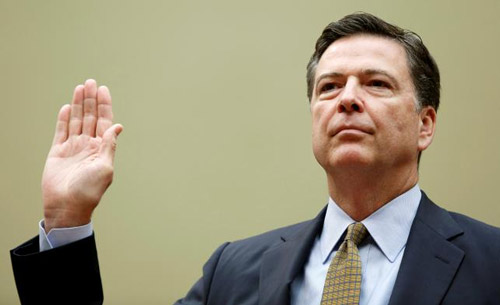 Former FBI Director James Comey has been under investigation for misleading President Trump – telling him in private that he wasn’t the target of an ongoing FBI probe while refusing to admit to this in public.

According to RealClearInvestigations‘ Paul Sperry, “Justice Department Inspector General Michael Horowitz will file a report in September which contains evidence that Comey was misleading the president” while conducting an active investigation against him.

Even as he repeatedly assured Trump that he was not a target, the former director was secretly trying to build a conspiracy case against the president, while at times acting as an investigative agent. –RCI

According to two US officials familiar with Horowitz’s upcoming report on FBI misconduct, Comey was essentially “running a covert operation” against Trump – which began with a private “defensive briefing” shortly after the inauguration. RCI‘s sources say that Horowitz has pored over text messages between the FBI’s former top-brass and other communications suggesting that Comey was in fact conducting a “counterintelligence assessment” of the president during their January 2017 meeting in New York.

What’s more, Comey had an FBI agent in the White House who reported the activities of Trump and his aides, according to ‘other officials familiar with the matter.’

The agent, Anthony Ferrante, who specialized in cyber crime, left the White House around the same time Comey was fired and soon joined a security consulting firm, where he contracted with BuzzFeed to lead the news site’s efforts to verify the Steele dossier, in connection with a defamation lawsuit. -RCI

According to the report, Horowitz and his team have examined over 1 million documents and conducted over 100 interviews – including sit-downs with Comey and other current and former FBI and DOJ employees. “The period covering Comey’s activities is believed to run from early January 2017 to early May 2017, when Comey was fired and his deputy Andrew McCabe, as the acting FBI director, formally opened full counterintelligence and obstruction investigations of the president.”

McCabe’s deputy, Lisa Page, appeared to dissemble last year when asked in closed-door testimony before the House Judiciary Committee if Comey and other FBI brass discussed opening an obstruction case against Trump prior to his firing in May 2017. Initially, she flatly denied it, swearing: “Obstruction of justice was not a topic of conversation during the time frame you have described.” But then, after conferring with her FBI-assigned lawyer, she announced: “I need to take back my prior statement.” Page later conceded that there could have been at least “discussions about potential criminal activity” involving the president. -RCI

Sperry notes that Comey wasn’t working in isolation on the Trump effort. In particular, Horowitz has looked at the January 6, 2017 briefing on the infamous ‘Steele Dossier’ – a meeting which was used by BuzzFeed, CNN and others to legitimize reporting on the dossier’s salacious and unsubstantiated claims.

While Comey claims in his book, “A Higher Loyalty” that he didn’t have “a counterintelligence case file open on [Trump],” former federal prosecutor and National Review columnist Andrew McCarthy notes that just because Trump’s name wasn’t on a formal file or surveillance warrant doesn’t mean that he wasn’t under investigation.

“They were hoping to surveil him incidentally, and they were trying to make a case on him,” said McCarthy. “The real reason Comey did not want to repeat publicly the assurances he made to Trump privately is that these assurances were misleading. The FBI strung Trump along, telling him he was not a suspect while structuring the investigation in accordance with the reality that Trump was the main subject.”

What’s more, the FBI couldn’t treat Trump as a suspect – formally, as they didn’t have the legal grounds to do so according to former FBI counterintelligence lawyer Mark Wauck. “They had no probable cause against Trump himself for ‘collusion’ or espionage,” he said, adding “They were scrambling to come up with anything to hang a hat on, but had found nothing.”

What remains unclear is why Comey would take such extraordinary steps against a sitting president. The Mueller report concluded there was no basis for the Trump-Russia collusion conspiracy theories. Comey himself was an early skeptic of the Steele dossier — the opposition research memos paid for by Hillary Clinton’s campaign that were the road map of collusion theories – which he dismissed as “salacious and unverified.” -RCI

According to House Intelligence Committee Vice Chairman Devin Nunes (R-CA), Comey and the rest of the FBI’s top team (including Peter Strzok and Lisa Page) were attempting to “stop” Trump’s presidency for political reasons.

“You have the culmination of the ultimate spying, where you have the FBI director spying on the president, taking notes [and] illegally leaking those notes of classified information” to the MSM, said Nunes in a recent interview.