Cities Across The Country Board Up Windows Ahead Of The Election 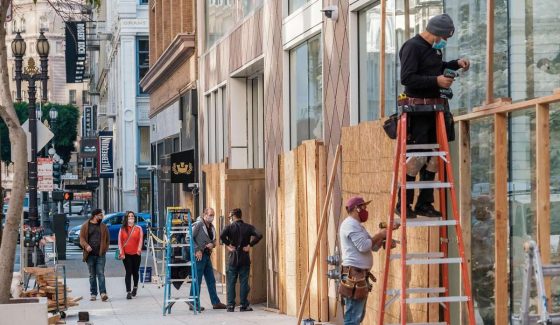 Many cities are anticipating election chaos and violence after the election takes place on Tuesday, so business owners have been boarding up their windows to prevent as much damage as possible. Small businesses are being systematically destroyed and this could be the end for so many more.

Regardless of the outcome, businesses are concerned about the public’s response to the winner. From San Francisco to New York, major cities are taking precautions and shuttering their doors and windows to prevent theft and damages. After a spring of economically disastrous lockdowns and a summer of protests, looting, and rioting, storefront businesses across the country are bracing for a potential wave of social unrest related to the election.

In Chicago, several businesses along the Michigan Avenue shopping district have boarded up their windows in preparation for Election Day, Adam Skaf, a spokesperson for the Magnificent Mile Association, told NBC News. The group also partnered with the city government to participate in an auxiliary command center on Election Day, when it will share real-time information to businesses.

Walmart has also taken a controversial step. The store said this week it would remove all guns and ammunition from its sales floors as a precaution, after seeing some “isolated civil unrest.” Walmart announced Friday it had reversed that decision, however.

Another Secret Model: A Contested 2020 Election

While President Donald Trump has repeatedly suggested that he will refuse to participate in a peaceful transition of power in the event he loses to former Vice President Joe Biden, Hillary Clinton and others have suggested the Joe Biden refuse to concede no matter what.

This election has been promised to be chaotic at best. Prepare for the worst while hoping for the best.  You cannot control the actions of others, but you can prepare for the rabid hoards of people that are likely to take to the streets the night of the election and for days, if not weeks afterward. Be where you want to be and make sure you are safe. This has been promised to be ugly, and with so many Americans impoverished thanks to lockdowns, people are going to feel backed into a corner, and they may think fighting is the only way out.