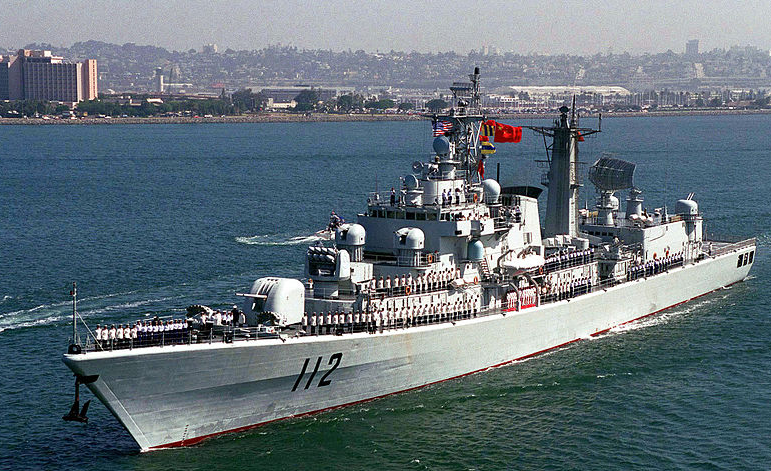 Public Domain, DoD image of Chinese Luhu Class Destroyer, HARIBING on the first ever Chinese “visit” of a warship to U.S. naval station in San Diego, 1997

Editor’s Comment: If a trade war there will be, China is more than ready to make a stand. The military issue over the South China Sea and disputed territorial claims is coming to a head. Both sides have demonstrated their ICBM missiles, and their respective strength. Any incident there could lead to war, and if so, then a blockade against all the commercial products and food items that China exports to America each year. Short of war, China has been edging forward with its currency, valuing it to keep Chinese goods appealing, and deepening its place in the basket of world currencies that is set to displace U.S. sole advantage through the petrodollar. If President Trump puts up a tariff wall against Chinese imports, or more drastically implements sanctions for any reason, there could be a hostile trade war that leads to military action.

There are many scenarios, and greater tensions than ever before. The stage is being set, and all is not quiet in the Pacific. Stand by, and keep close watch over the reported interactions between warships both in the Asian sphere, and close to the shores of Iran. Meanwhile, Russian spy ships have been seen trolling U.S. waters. How crazy are things about to get?

China May Bar US Ships From Passing Through Its Waters

In a preemptive move to limit foreign naval presence in proximity to China and especially the disputed South and East China Sea islands, China’s People’s Daily reports the Beijing is set to revise its 1984 Maritime Traffic Safety Law, which would allow the relevant authorities to “bar some foreign” (read U.S.) ships from passing through Chinese territorial waters. The Legislative Affairs Office of the State Council announced Tuesday it is soliciting public opinions on the revisions. Think of it as an Air Defense Identification Zone, only in the water.

According to the Chinese press, the draft would empower maritime authorities to prevent foreign ships from entering Chinese waters if it is decided that the ships may harm traffic safety and order.  The draft revisions would grant authorities the right to designate specific areas and temporarily bar foreign ships from passing through those areas according to their own assessment of maritime traffic safety. The revisions are based on the UN Convention on the Law of the Sea and Chinese laws on the sea, adjacent areas and exclusive economic zones, the office said.

It was not clear how China would implement and enforce this bar, or what the punishment for transgressors would be.

Wang Xiaopeng, a maritime border expert at the Chinese Academy of Social Sciences, told the Global Times on Wednesday that the revisions will provide legal support for China to safeguard its maritime rights.

“As a sovereign State and the biggest coastal State in, for example, the South China Sea, China is entitled to adjust its maritime laws as needed, which will also promote peace and stable development in the waters.”

Quoted by the Daily, Yang Cuibai, a professor with the School of Law at Sichuan University, agreed, saying that “the revisions will strengthen China’s management over territorial waters in a new era when the country’s communication and trade with foreign countries in the waters have sharply increased.” Yang added that China should take the lead to establish the legal order in the Yellow Sea, the East China Sea and the South China Sea.

Additionally, the draft said that foreign submarines would travel on the surface, display national flags and report to Chinese maritime management administrations when they pass China’s water areas. They should also get approval from the relevant administrations to enter China’s internal waters and ports.

Foreign military ships that are approved to enter China’s waters should apply for pilotage. Foreign ships that enter Chinese waters without approval will be fined 300,000-500,000 yuan ($43,706-72,844) and those violating Chinese laws would be expelled, it said.

“China’s waters are open to foreign ships as long as they do not damage the waters’ safety, order, or China’s sovereignty,” Yang said.

The draft also states that people in distress at sea have the right to be rescued without charge, adding that human lives should come before the environment and assets.

The State Council and local governments should set up maritime search and rescue centers, if needed, to organize, coordinate and command rescue operations, the draft says. Civilian groups are also encouraged by the revised regulations to set up rescue teams and participate in such operations.

Aside from the contested islands, the waterway in question is one of the biggest focal points of global naval trade: should China implement a mandatory check of each and every naval vessel, it may have a chilling effect on global seaborne trade, which would come at a time when worldwide commerce is already declining and could be further impacted in coming months should Trump implement his protectionist trade agenda.