Battle Hardened Russian Spetsnaz May Tip The Balance In Syria: “They Are Formidable Opponents To Be Taken Seriously” 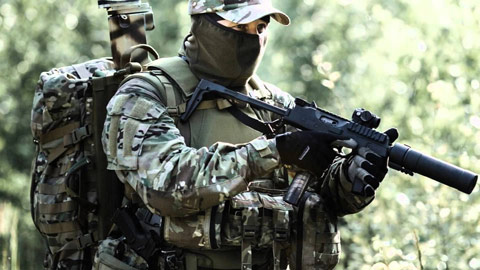 The last installment gave the readers a picture of how Russia and the United States are positioning their Special Forces assets, posturing for a potential Ghost War between the two elite groups.  The previous article also presented the basic role of the U.S. Army Special Forces (Airborne).  Recall that Green Berets function as “force multipliers” designed to optimize civilian human resources in an unconventional (guerrilla) warfare capacity.  These resources are drawn from local indigenous personnel within the combat theater of operations.

But what of their Russian counterparts, the Spetsnaz?  Not too many people are aware that the Russian warriors have a long and distinguished history that effectively begins with WWII (although their inception as deep reconnaissance battalions stem further).  Spetsnaz is an acronym for (phonetic) Spetsialnoygo Nazhacheniye, or Special Reconnaissance-Intelligence units.

Spetsnaz units in combat primarily operate behind enemy lines either overtly (in military uniform) or covertly (in civilian garb).  They can be inserted by parachute, submarine, or travel inconspicuously to the LD (line of departure) to their destination by whatever means they see fit.  Their primary missions involve assassinations of government officials and military leaders, destruction of enemy command and communication centers, intelligence (spying), counterintelligence (that involves hunting down and killing spies), and sabotage missions (hydroelectric plants, transportation hubs, airfields, etc.)

The next higher elite unit among the Spetsnaz are GRU-Spetsnaz, and the acronym GRU, or Glavnoye Razvedyvatel-noyi Upravlaniye, or Main Intelligence Directorate.  Where Spetsnaz are the Operators, these men are the Specialists: extraordinarily cross-trained in the most precise and surgical techniques of assassination, demolitions, espionage, and special intelligence operations that combine all of these phases of instruction.  The missions these men run are usually task organized by three man teams, or cells.  Larger missions may have several cells working in conjunction with one another; however, for the most part Operators work as individuals or as cells.

Finally, there is the Foreign Intelligence Service of Russia, the SVR, and this group has a special unit that is even more elite and closely-guarded (information-wise) than the previously-mentioned Spetsnaz units.  The unit is the elite Special Forces unit called Zaslon, and the very existence of the unit is denied thoroughly by the government of Russia.  Zaslon means “Shield,” or “Barrier,” and their mission is covert, operating under deep cover.  All of the operatives are Spetsnaz qualified, having served in the two former units prior to their service in Zaslon.

The unit is used to provide protection for Russian ambassadors, conduct deep-cover intelligence and contact development, top-level assassinations, and the most delicate of all such terminations: the ones the autopsies rule to be “a death by natural causes,” leaving not a shred of evidence to the contrary.  These highly trained, experienced operators have decades of experience in the former two Spetsnaz units.  Handpicked for their intelligence and physical prowess, the Zaslon operatives are all fluent in several languages with extensive foreign service under their belts.

Although they answer primarily to the SVR, the Zaslon team members will sometimes be tasked as advisors or instructors (in an operational capacity, for planning and leadership control) to GRU-Spetsnaz for especially sensitive or “hairy” missions.  Their equivalent(s) in the United States Military and Intelligence Services can be found in the Tactical Support Teams (TST’s), and in SAD, of the Central Intelligence Agency.

Currently in Syria, Spetsnaz has been deployed (shifted) from the Ukrainian theater of operations; therefore, in essence, redeployed, as Spetsnaz units that are not training are operating.  They have been conducting raids with air assault (helicopter) deployment, in addition to intelligence gathering.  Such intelligence requirements invariably involve “snatch-and-grabs” (kidnapping) for a subject to be interrogated, along with acquiring documents and photographic evidence.  Their targets are reportedly “ISIS/ISIL,” but in reality they are after anyone or any group fomenting dissension or rebellion against Syrian leader Bashar al-Assad.

In the Northern part of the country, in areas such as Raqqah, Tel Abyad, and Shadadeh, the Rebels (whom the U.S. supports) are the primary opponent of Spetsnaz and the coalition they are directing comprised of (for the moment) Iranian Republican Guardsmen, Lebanese Hezbollah, and Syrian regulars serving the Assad government.  The Syrian Army (after many decades of partnership with the former Soviet Union, now Russia) has many Russian-speaking operatives to assist in the operations of their ally.

The main Rebel points spread out in an upside-down crescent at the Northern border of Syria running the full length of the country and halting at Derek and Darbasiyeh, where the Kurdish forces in the Northeast hold sway.  The Spetsnaz units have been conducting ground strikes on the Rebel command and control centers, as well as assassinations of key Rebel military personnel.  Key areas that will come into play later as action intensifies are the Shadadi Oil Fields of Northeastern Syria, as well as the Omar Oil Field in the Southeast.  In the center of Syria lies the Shaer Gas Field, a huge natural gas repository that the U.S. and NATO would love to secure for the purposes of undercutting the Russian supplies to Eastern Europe.

Zaslon (the unit that Russia has denied the existence of) has existed…and has been operating in Syria since at least May 10, 2013, as a small group of operators deployed there when Russian Foreign Minister Sergey Lavrov and U.S. Secretary of State John Kerry were trying to work on a brokered peace deal.  Zaslon was sent there specifically to keep Assad from being assassinated and/or removed from power.  They’re also in Syria to cover any tracks that may incriminate Russia if things “go south” for Assad, as internal security is one of their specialties.

To summarize, the Spetsnaz units are top-flight groups of extraordinary warriors dedicated to their profession and they are battle-hardened from their years with the wars in Chechnya, Georgia, and Ukraine.  They are formidable opponents to be taken seriously, and their role in Syria has neither been fully developed nor clarified.  They are worthy adversaries that can very well tip the balance in the region and completely offset any plans the U.S. and NATO has for the region.  In the coming days and weeks, we will certainly see more of their operations and how it may tip the overall balance of power in the region and the Middle East as a whole.