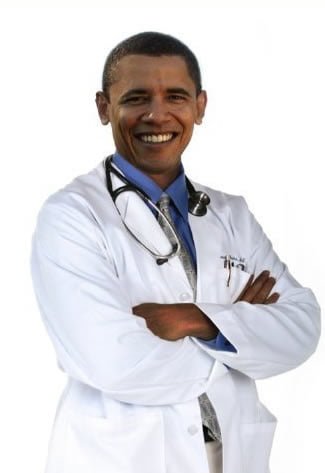 If having your doctor quiz you about owning a gun isn’t enough to raise your blood pressure, then this new Obamacare policy surely will.

Obama’s White House is once again politicizing health care, even as the net/noose tightens, now asking medical professionals to advise patients on the effects that global warming/climate change will supposedly have on their health.

Americans trust their doctors, so the White House wants these medical professionals to be a mouthpiece for President Obama’s global warming agenda.

The central message: doctors should warn their patients that global warming could make their health worse.

It’s not clear what the details of that politically correct advice will be, but here’s a prediction – for increased stress from economic fines and penalties for using resources, meeting new codes, as well as symptoms of indigestion from swallowing or being force fed repeated propaganda.

It is not unlikely that poor health profiles – such as being overweight, obese, a smoker, having preexisting condition – could someday add penalties to individuals for failing to comply with climate change remedies or disqualify them from inclusion in the same way that insurance weighs these factors for coverage.

After all, the assumption of AGW is that people are what’s making the planet worse, and people like Al Gore have advocated making laws to “punish” climate change deniers.

Critics are concerned that these politically-loaded doctor’s visit questions could be a means of classifying patients and flagging them in databases for their extremist views. President Obama’s barrage of 23 gun control executive orders, issued in the wake of Sandy Hook, included a “clarification” (read: nudge) that “the Affordable Care Act does not prohibit doctors asking their patients about guns in their homes.” Many commenters have noted their experiences with doctors popping the question.

Guns, like political attitudes about climate change and other issues, are legal and constitutionally-guaranteed rights now, but may be increasingly challenged by bureaucracy and eroded by legal interpretations, database threat scores and quasi-private corporate policies.

Whatever you do, don’t suggest that global warming could just be a placebo for greater government control.

Read more:
• Shock Medical Notice: We Need to Have a “Short 5 Minute PRIVATE Conversation With Your Child”