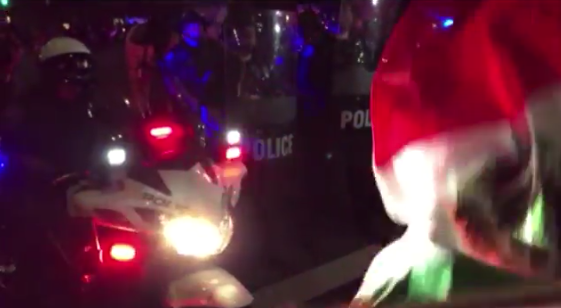 Those who see violence as an inevitable result of this tumultuous election cycle are being proven right.

Chances are that we haven’t seen anything yet…

As the Daily Mail reports:

Protesters clash with cops at California Trump rally: Hundreds of Mexican flag-waving demonstrators smash up a squad car, punch a Donald supporter and scuffle with riot police amid angry scenes

The protesters flooded the street outside the amphitheater with some stomping on cars, hurling rocks at motorists and forcefully declaring their opposition to Trump – bringing traffic to a halt and creating a tense standoff with authorities.

[…] Photos from the scene showed a visibly bloodied Trump supporter after he was punched in the face as well as several people being arrested and handcuffed by police.

In the chaotic scenes, some of the demonstrators reportedly carried benches and blocked the entrance to the 55 Freeway along Newport Boulevard.

Here are some of the videos from the insanity as demonstrators attack a police cruiser:

Hundreds of cops were also on scene, and made several arrests, while at least one Trump supporter was bloodied.

Of course, Donald Trump has repeatedly been compared unfavorably to Hitler, and accused of being a fascist for his bold positions on building a wall on the Mexico border, a key flashpoint for his detractors who have taken to the streets in violence.

By the time the RNC and DNC conventions arrive, this type of rioting may be typical of every city the candidates campaign in, and could very likely escalate during the formal nomination process – particularly if the GOP insiders follow-through with their threat to defeat Trump through a brokered convention.

Could this unrest reach a tipping point and spread to the point of justifying a massive clamp down on free speech and civil liberties?

Things could definitely get nastier… just wait and see.

Trump is Riding a “Rising Tide of Discontent Within the U.S.,” But Can He Really Change Things?