An EMP Attack And Nuclear War: Our Biggest Security Threat Is Not From North Korea, Russia or China 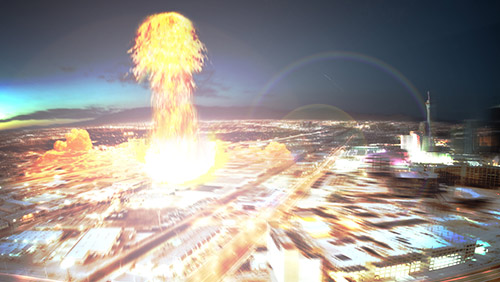 There is no redundancy when it comes to keeping aware of significant happenings that can trigger a war.  In this light, what would be the “trigger” factor?  Would this lead to a nuclear exchange?  What would be the result after an exchange does occur?  Where would the nation stand, and how, after an EMP (Electromagnetic Pulse) attack, and/or a limited nuclear war?  All of these are difficult questions to answer.  Cato the Elder ended his speeches on the floor of the Roman Senate with “CARTHAGO DELENDA EST,” translating into “Carthage must be destroyed.”  To utilize his “technique” of impressing such upon his audience, here is my personal caveat that I repeat wholeheartedly:

A war would be kicked off with an EMP weapon detonated over the Continental United States, then a nuclear exchange, resulting in a World War.

That being mentioned, the North Koreans detonated another nuclear device, of greater size than previous tests.  This particular test was their fifth, and they conducted it on Friday, September 9th right after Obama left China from the G-20 summit held there.  A Pyongyang newscaster was quick to trumpet the success of the test, as such:

“We successfully conducted a nuclear explosion test to determine the power of [the] nuclear warhead.  We will continue to strengthen our nuclear capabilities to protect our sovereignty. We have now standardized and minimized nuclear warheads … We can now produce small nuclear warheads any time we desire.”

The USGS (United States Geological Survey) reported that the aftershock from the explosion left a 5.3 magnitude seismic tremor.  Estimates of the size of the nuclear device range from 20 to 30 kilotons.  The atomic bombs dropped on Hiroshima and Nagasaki were 15 and 21 kilotons, respectively; therefore, this latest North Korean test falls well within the range of being able to take out a city.  The estimate came from Jeffrey Lewis, the Director of the East Asia Nonproliferation Program in an interview with the Washington Post.

The biggest threat doesn’t simply come with North Korea, however: the larger threat is the climate of disbelief fostered by naysayers that denigrates North Korea’s capabilities and efforts, leading to a relaxed, complacent posture.  As much as the North Koreans have been testing SLBM’s (Submarine-Launched Ballistic Missiles), medium-range missiles, satellite launches, and nuclear tests, there is plenty of evidence to support their claims of nuclear warhead miniaturization capabilities.  One good example of such a naysayer to miniaturization that shows the folly of such though is the statement by Melissa Hanham of the Middlebury Institute of International Studies based in California, as follows:

“We would need to see it tested on a missile, like China did in the 1960s.  Nobody wants to see that. There is no way they could do that test in a safe way, and it could easily start a war.”

She is listed as an “expert on North Korea.”  Thanks for nothing.  Basically, she stated that they’ll be able to verify it [the miniaturization, and the effectiveness] after it has been put to use…in a war.  Brilliant.

Monday, September 5th is when the North Koreans tested 3 medium-range ballistic missiles, just as all of the leaders were gathered for the G-20 summit.  The interesting thing to note here is that the aforementioned Jeffrey Lewis also works for the Middlebury Institute, and his assessment is more of a warning than his colleague’s.  He said the following to Reuters:

“That’s the largest DPRK [North Korea] test to date, 20-30kt, at least. Not a happy day.  The important thing is that five tests in, they now have a lot of nuclear test experience. They aren’t a backwards state anymore.”

Dr. Peter Vincent Pry, cited in numerous previous articles is the foremost expert on EMP threats to the United States.  Dr. Pry’s information regarding potential threat nations stems from his years as an analyst for the CIA, and he maintains close ties with the agency as well as serving on the various EMP threat commissions that brief Congress annually.  Dr. Pry has indicated that the nations of North Korea and Iran both hold a military doctrine of nuclear first strikes against America by employment of an EMP device above the continental United States.  His detailed analyses can be referenced and downloaded by visiting the sites with the EMP threat briefings that he has given to Congress from 2006 through 2010.

The other consideration here is that to deliver an EMP, it is no longer necessary to detonate a nuclear warhead in the “megaton” ranges.  A low-yield nuclear device can generate the EMP, and the North Koreans have been stating (very publicly) that they will attack the U.S. in such a manner.  Elias Groll of Foreign Policy Magazine wrote a piece entitled “This is How North Korea will Get Its Nukes Past American Missile Defense Systems,” showing how the THAD anti-ballistic missile system can be circumvented by launching multiple missiles simultaneously to confuse the system’s radar.

The North Koreans aren’t playing around.  Two days prior to their nuclear test, on Wednesday, September 7th a DoS (Denial of Service) attack came electronically against the Project on Crowdsourced Satellite Imagery.  This organization monitors nuclear sites and nuclear weapons storage facilities around the world, and it sells its services to governments.  You can read more about this in the article “DoS Attack Crashes Website Monitoring North Korea’s Nuclear Test Site,” by Eric Niiler of Wired.com.  Guess who else is involved in this one?  Melissa Hanham again.  Here’s an excerpt of the article giving her thoughts on the negated monitoring, as the server handling the satellite information was taken down by hackers prior to North Korea busting a nuke:

“It’s suspicious timing.  It’s also really frustrating.  We are restarting and our security company is looking into as much information about the attack.  We are going to get it up as soon as possible.”

This instills a vote of “no confidence” all across the board.  Would it be merely “suspicious” and “frustrating” if in the blink of an eye we morph into Fortschen’s novel One Second After as a result of an EMP?  What happened with this monitoring station shows how easily and by the exact method the North Korean EMP will be accomplished:

Hackers will take down the monitoring stations’ servers before the EMP is dumped out, preventing an effective response to stop it.

Numerous websites and sources have revealed that during the exercises conducted in Hawaii in GridEx 2014 where the Russians and Chinese participated with U.S. troops, our defenses for EMP and nuclear threats were exposed.  Our cybersecurity has been compromised for some time, and how would it be determined who hacked into the systems after an EMP had struck the United States?

North Korea is not a joke anymore, and their threat becomes both more visible…and viable…by the day.