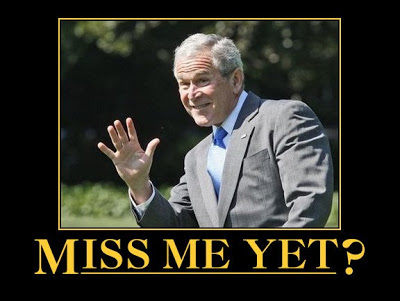 Editor’s Comment: Few blogs are as consistently aware of keeping their principles as is Liberty Blitzkrieg. Michael Krieger is proving to be the voice that we all need to keep close to our thoughts, reminding us that our civil liberties and rights are firm; that opposition to war and torture is moral; and all the slippery sliding around on ideological positions – by politicians, celebrities and media organizations, including alternative media – will do nothing but hasten the ruin of this country. Compromising, flip flopping and fudging on important issues to gain power and influence with the ‘winning circles’ does no one any good and reflects a truly weak and unprincipled individual.

Former president George W. Bush and his clan of neocons and shadow rulers lied to the country to drag us into war; dozens of figures inside his administration appeared to have prior knowledge of 9/11 and were certainly ready (with expansive middle east war plans, the PATRIOT Act and more) to exploit it to the hilt. Their prosecution of the war killed over a million civilians, and more than 4,400 U.S. soldiers were killed in action, and hundreds of thousands were wounded. This was all for illegitimate reasons, and disgusting underlying motives that don’t even reflect the interests of the American people. Freedom was sacrificed for a trans-national empire, and the enrichment of a handful of insiders and owners, while the war fueled the rise of sectarian violence, giving rise to ISIS and guaranteeing future phases of a wider conflict.

There is blood on his hands; as there is on former President Obama and current President Donald Trump. One does not wash that evil simply because one becomes politically useful to new opposition alliances. This failed thinking partially accounts for the continued “swamp” in Washington. How many policy makers and deep state operatives are guilty of treason?

In conclusion, we need popular movements, we don’t need stupidity. If you don’t like Trump’s vision, you better have competing vision and be willing and able to articulate it. The status quo is dead. We are in a populist age, with tremendous opportunity to make the world a better place if we can take the moment and run with it. As it stands, the Democratic Party remains business as usual, and if it stays that way, will continue to lose election after election and become a increasingly irrelevant factor in American political life.

If you don’t want to be an irrelevant victim of history, the time is now to become involved in powerful political movements. This doesn’t include covering your ears, smashing windows and complaining about the Russians.

– From the post: You Can’t Resist Trump by Closing Your Eyes

I’m not a big fan of litmus tests, but here’s one I think is entirely appropriate. If you’re a self-proclaimed “liberal” who’s suddenly fawning over George W. Bush, you’re a fraud and should probably never speak again.

Unfortunately, this most recent demonstration of mindless, unprincipled liberal “ideology” continues to make the term completely useless, and the people who use it to describe themselves, increasingly irrelevant. When you stand for nothing, you’ll allow anything, including the whitewashing of war crimes. This is precisely the direction celebrities, fake liberals and the corporate media are taking us in, and it’s no accident.

Think about it. If the public can be convinced that George W. Bush is some sort of hero just because Trump is in office, what can’t we be convinced of? If torture and the destruction of a nation based on false information can now be overlooked, what can’t be overlooked? That’s why this intentional resurrection of George W. Bush seems like a psychological operation against the American public. It’s a way of saying, who cares about the horrific crimes committed by the American elite class over the past 20 years, we have to unite against Trump and Putin! To this I say: Never.

The people who knew Trump could win all along were precisely the people most aware of the endless series of crimes commented by the American elite class against the American public. Now, the people who committed these crimes and their corporate media mouthpieces are trying to brush it all under the rug in the name of fighting Trump. They’re starting with the legacy of George W. Bush, but it won’t stop there. The country is in the state it’s in because of the elitist class, not because of Trump or Putin. If we take our eye off the ball at this key moment, all will be lost.

To give you a sense of just how deranged this whole push is, take a look at the following excerpts from The Washington Post article,
Michelle Obama Isn’t the Only Liberal Embracing George W. Bush These Days:

Eight years ago, amid the financial collapse known as the Great Recession, America broke up with its 43rd president with such relief it might as well have dumped his clothes on the White House lawn and screamed from an open window “get out!”

In 2008, at the close of his second term, President George W. Bush’s approval ratings had plunged to 25 percent, among the lowest in presidential history next to Harry Truman and Richard Nixon. His would-be Republican successor, candidate John McCain, actively distanced himself from the Bush administration and comedians relentlessly mocked the man.

But in the first few months of 2017 and amid a book tour that landed him glowing spots on the “Ellen DeGeneres Show” and in People magazine, Bush is at least getting a little more respect from some who deeply disrespected him.

Some of the rethinking of Bush stems not from anything Bush has said or done but simply from the contrast with President Trump, a comparison bolstered by his recent appearances on talk shows and in news segments.

After the “Ellen” show posted a video of the former president joking about his inner “Rembrandt” and learning to paint, viewers flooded the comments with unexpected praise.

“A few years ago I would have rolled my eyes at the [sight] of this man, but 6 weeks of Trump makes W look like a pretty decent guy,” one woman wrote. “Perspective is a funny thing.”

Added another: “I used to be a big critic of him and still don’t agree with much of what he did while in office. But, given who is now in office and how scary 45 is making the world, I’ve come to actually like this man.”

It was an idea comedian Aziz Ansari explored in January during his monologue as host of “Saturday Night Live,” the same show that spent years writing unflattering skits of President Bush and has since turned its humor to a new GOP target.

“George W Bush made a speech after 9/11, and it really helped,” Ansari said. “Things changed. … He said Islam is peace.”

Yes, wonderful words. Unfortunately, that’s all they were, as he proceeded to murder half a million Iraqis based on false information.

“What the hell has happened?” he said during the monologue. “I’m sitting here wistfully watching old George W. Bush speeches?’ Just sitting there like, ‘What a leader he was! … He guided us with his eloquence!’”

What the hell happened? I’ll tell you what happened. You lost your fucking mind.

Joy Behar, the liberal on the daily talk show “The View,” noted after Bush’s comments that though she was “after” him for eight years, she just might purchase one of his paintings because of Trump.

“The thing about this,” she said, “is that Donald has now done something I thought he would never do. I like — I like the fact that George Bush — I like George Bush now, is what I’m trying to say. I’m having trouble saying it.”

Star Trek’s George Takei also weighed in: “You know things are bad when George W. Bush starts sounding like a member of the Resistance.”

Wrong. You know things are bad when “the resistance” is so ideologically weak and castrated it eagerly embraces George W. Bush.

At this point, I want you to watch the Ellen clip. The dancing is nauseating enough, but it’s the embrace that really sticks with you. There is a look of affection from Ellen that simply cannot be faked. It’s utterly creepy.

Moving forward, what can we do about it? I think we need to start thinking about celebrity boycotts. I’m not sure what the strategy could be though, because no one reading this actually watches The View, and the people who do are probably beyond help. So how can we strike back in a non-violent, creative way against these celebrities and their shows? I’m not sure, but if anyone has ideas, please share them in the comment section. We need to start thinking in such terms.