Hurricane Ravaged Dominica: ‘It’s All Gone’ And Fighting For Survival 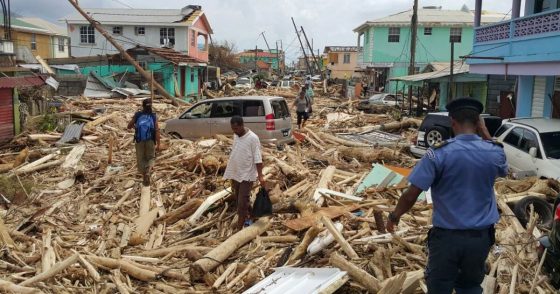 In just the blink of an eye, island life on Dominica was turned upside down.  Like Puerto Rico, Dominica was violently ravaged by Hurricane Maria, and residents are still fighting for survival.

The wooden frames and scattered, water-damaged belongings are all that remains of some homes of on Dominica, which was ravaged by Hurricane Maria last month. Without warning, the storm rapidly accelerated from a Category 3 to a Category 5, and residents said they could do little to prepare. “There was lightning, there was heavy rain…[it was like] the hurricane was in the house,” said Dominica’s Prime Minister Roosevelt Skerrit according to ABC News. “We have lost everything that money can buy, and that is a fact.”

The roof of Roosevelt Skerrit’s house was blown away and its floors flooded. On the night Hurricane Maria hit, Skerrit took to Facebook to post updates including one that said, “I am at the complete mercy of the hurricane. House is flooding” and another that said, “The winds are merciless! We shall survive by the grace of God!” Later he posted, “I have been rescued.”

“You can still see the shock, the anxiety, the fear the trauma in the eyes and the expressions of people every day,” he told ABC’s Nightline. “Their entire life investments, life’s savings, blown away.” Another now displaced resident named Emmanuel Peter said he can still remember the roar of the hurricane-force winds. “It was just whistling, whistling,” he said. “I thought it would burst my eardrums.”

Puerto Rico was not the only island in Hurricane Maria’s path, and almost a month later, both islands still look like post-apocalyptic zones.  But the island with the highest death toll per capita was Dominica; a close-knit, mostly Christian nation that was left at the mercy of a hurricane that shared a name with the mother of Christ: Maria.  To date, 26 people are confirmed dead, 31 are still missing, and more than 50,000 people are displaced on the island that has a total population of roughly 74,000.

When  ABC’s Nightline visited Dominica six days after the storm, the only way to reach its interior was with the United States military. Upon arrival, many who had the option to evacuate the island were already in the process of doing so, including 1,300 students at Ross University Medical School, an American college based in Dominica.

“I do feel sadness for the people of Dominica,” said Carey James, the college’s associate dean of operations, analysis, and admissions. “My wife’s family is from Dominica … and it’s hard to see a place that you love go through that kind of a storm.” And nearly four weeks after the storm, people are still fighting to survive.

No one on the island has access to running, drinkable water, and with sewage systems destroyed, residents are contending with fears of diarrhea, dehydration, and dysentery. Much of the island still remains without power. For the vast majority of Dominicans, the choice to leave their home country isn’t financially available. More than 85 percent of houses have been damaged, and of those, more than a quarter simply do not exist anymore, leaving many of the residents homeless.