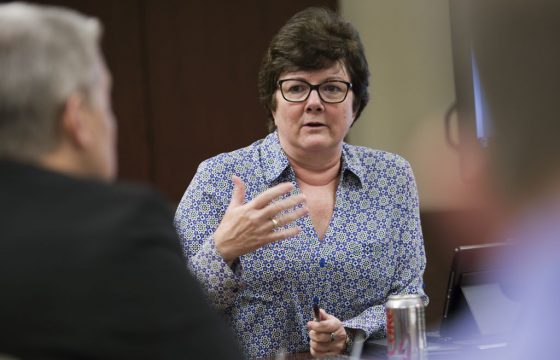 In yet another astonishing example of unhinged liberalism, the mayor of New Brighton, Minnesota was recorded breaking down in tears after a councilwoman explained how her life history did not line up with the liberal claim that she had benefited from white privilege throughout her life.

The video footage, taken during a city council meeting on October 3rd of this year, starts with liberal councilwoman Mary Burg lecturing her peers as to why they should feel guilty for being white.

In her rambling speech, Burg seemingly suggested that the city council couldn’t even move forward with their job if they did not all accept that there life was easier for simply being white, regardless of actual life experiences.

“Okay, we all have white privilege. We don’t know what it’s like to not have it because we do. We go everywhere and we’re just, we have that. We, we don’t know the difference.

We don’t know what it’s like to not have it and I said we can’t do what, look at who’s up here. We can’t move forward as all being people of white privilege. We can’t, because we don’t know the difference of not having it.”

Burg’s assertions were then challenged by councilwoman Gina Bauman, who calmly explained her life story, complete with immigrant parents and a history of working hard to get where she is now.

“Because I’m white, you think I was privileged my whole life? Are you kidding?” Bauman countered. “I grew up in an Italian neighborhood. They came here, my grandfather came, they didn’t speak English, but they assimilated.”

“I resent that you think that I had white privilege,” Bauman continued before also noting that every single American citizen has privilege simply for living in the United States. (Of course this is a horrifying thought to the new liberal mindset)

“Everybody I work for, or with is usually from another country and they say to me, here’s what they say, is we as Americans don’t realize and it doesn’t matter what color we are as Americans, because I believe we are all Americans that are privileged to just live here.

“So I don’t want to think that this body doesn’t feel that they can’t represent people because they’re white, and that again to me is just saying, ‘I’m different because of color.’ No. I might be different because of culture, because of tradition, but those are the things that I think I always ask when I, cause I work with these people.”

“I ask about their country, I ask about their families, I ask how it is, how they feel about America. All of that. That’s how you get to know somebody. That’s how you get to understand where they come from, where their opinions come from. But I don’t think you can make such a broad brush and say that we’ve all been privileged or that we don’t understand because we’re white.”

The argument is then taken to another level completely when Mayor Val Johnson jumps in with the outlandish claim that Bauman is automatically racist for not immediately conforming to the new liberal orthodoxy.

“You are the exact reason we need this commission,” Johnson tells Bauman. “If you don’t understand white privilege then you are not representing those people. You’re not willing to listen to them and what you have just said is the most racist..”

The liberal mayor then attempted to backtrack a bit while still calling Bauman’s own thoughts and personal history racist. Eventually the meeting got to the point that Johnson literally could not handle even being questioned about her beliefs, instead opting for anger and then tears.

“You’re interrupting me! And by golly I’m running this meeting!” Johnson loudly claimed as she slammed her hand down onto the table.

“You know what? We’re on camera and you’re accusing me of something pretty big here,” Bauman countered. “And it’s unacceptable because you have no case.”

“You’re out of order!” Johnson replied, almost fuming at the mouth over her liberal orthodoxy being questioned.

Liberalism has become synonymous with insanity!

Conservative commentator Mark Dice also published a video on the city council meeting that is well worth the watch. (and laugh)