Unbelievable: The Deep State Is Now Going After Michael Flynn And Donald Trump For Wanting To TAKE OUT ISIS Terrorists 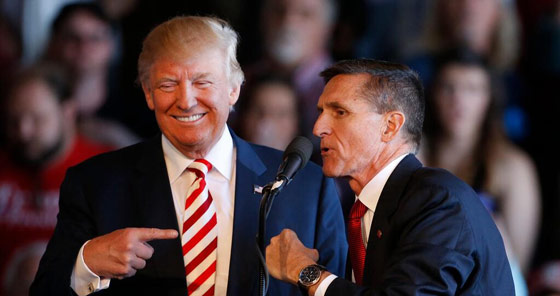 In a move that has the entire liberal media establishment up in arms with claims that this could bring down the president, former Trump national security adviser Michael Flynn has pleaded guilty to lying to the FBI about conversations he had with the Russian ambassador.

Despite the fact that outlets such as CNN and ABC News are breathlessly reporting that the charges against Flynn have to do with Russia, it has actually been revealed that the reason for the calls to the Russians was to coordinate the FIGHT AGAINST ISIS.

ABC News reported that Flynn, the former national security adviser, would testify that he was directed to make contact with Russians during the presidential campaign in 2016. Flynn pleaded guilty to lying to the FBI about his postelection contacts with Russia’s ambassador to the U.S.

ABC said later in an updated report that Flynn will say Trump asked him to make contact with Russia “initially as a way to work together to fight ISIS in Syria.”

In a statement, Flynn said he agreed to “cooperate with the Special Counsel’s Office reflect a decision I made in the best interests of my family and of our country.”

That’s right, Michael Flynn, and President Trump by extension, are now being attacked by Mueller and the entire deep state simply for seeking to work closer with Russia in order to take out literal terrorists!

As news broke that Michael Flynn would testify that Donald Trump ordered him to talk to the Russians during the transition phase between administrations, the left exploded with glee that actual evidence of “Russian collusion” was in sight and it could bring down Trump.

The reality turned out to be somewhat disappointing for them.

ABC News reported that Trump directed Flynn to speak with the Russians “initially as a way to work together to fight ISIS in Syria.”

In other words, Trump committed the grievous sin of attempting to work diplomatically with another super power to defeat Islamic terrorism.

This is hardly the damaging revelation Trump’s enemies had been hoping for.

Talking to ambassadors is not a criminal offense, it’s a routine procedure for incoming administrations. Obama campaign officials responsible for the “reset policy” with Russia met with Russian officials back in 2008 before the election had even taken place.

The real reason Flynn was brought down on a technicality is because he made an enemy out of the deep state by directing exposing them for failing to fight ISIS and to some extent actually helping the spread of radical Islam.

At this point one has to wonder if Mueller himself is actually running cover for a terrorist organization as he has done in the past.

The National Review’s Andrew McCarthy also destroyed the notion that this is some big bombshell:

It remains unclear why the Obama Justice Department chose to investigate Flynn. There was nothing wrong with the incoming national-security adviser’s having meetings with foreign counterparts or discussing such matters as the sanctions in those meetings. Plus, if the FBI had FISA recordings of Flynn’s conversations with Kislyak, there was no need to ask Flynn what the conversations entailed.

Flynn is prepared to testify that Trump directed him to make contact with the Russians — initially to lay the groundwork for mutual efforts against ISIS in Syria. That, however, is exactly the sort of thing the incoming national-security adviser is supposed to do in a transition phase between administrations. If it were part of the basis for a “collusion” case arising out of Russia’s election meddling, then Flynn would not be pleading guilty to a process crime — he’d be pleading guilty to an espionage conspiracy.

So there you have it. These entire “bombshell revelations against Flynn” are literally NOTHING but two politicians trying to reach out to another country in order to FIGHT ACTUAL TERRORISTS. I repeat, Flynn and Trump are being attacked for reaching out to a Russian ambassador about FIGHTING ISIS.

It truly doesn’t get any more bizarre than the establishment media attacking Americans who want to take out ISIS.