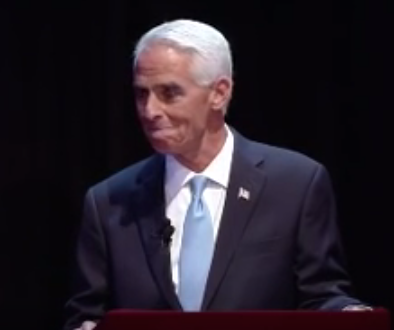 The face you make after having to endorse your party’s 2016 presidential nominee.

This video from a debate for a congressional race in Florida is going viral because of how unbelievable it is that someone would pretend Hillary Clinton is an honest and trustworthy candidate.

Just watch as former Governor Charlie Crist – who has now lost several bids for office – tries to pass off his ‘sincere belief’ in Hillary’s qualities for the highest office… and draws laughter from the crowd instead. He dared to say:

His own faces nearly cracks before he wraps up his statement and the cameras turn away:

Crist, who was governor of Florida from 2007-2011,  is a former Republican who only flipped to the Democrats in 2012 – and had a hard time holding his composure as he made a ridiculously weak endorsement of Hillary’s candidacy for president.

But really anyone would. The body naturally shirks away from something so vile and false, and even seasoned career liars find it hard to work with the material they have been prompted with.

Read his words on paper. They sound like a prompt from someone under Soviet brainwashing and put on trial:

I believe that she is steady.

I believe that she is strong.

I believe that she is honest.

Completely the opposite of reality in every way.

Really, Backwards-is-forwards would make a better motto for Hillary’s campaign.

People have never been so anti-establishment during an American election, and there is a strong rebuke of the very sort of thing she really represents.

Even the empty suits and political hacks hired to regurgitate their talking points are having a hard time keeping up the ruse.

This Is Hilarious: Man Shouts “Hillary For Prison” And Clinton Responds With “Let’s Make It Happen!”