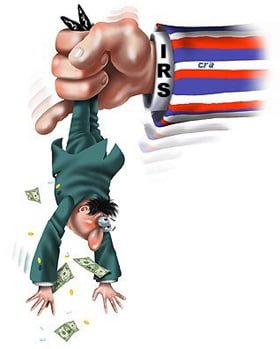 Editor’s Comment: The IRS has never been concerned about the law – if they did, they wouldn’t exist under their current formation. With so many expenditures in government, though, it is working overtime to pull extra cash from the milk cow – and now even going after individuals and businesses on the thinness of pretexts.

That’s why it is so important that the Bill of Rights be defended, and rights be observed and protected. SWAT teams demanding cash with a bag at the door – literally or metaphorically – is not freedom.

Police departments aren’t the only ones seizing money from citizens without charging them with a crime: the IRS is in the civil asset forfeiture game too.

In just two years – from 2012 to 2014 – the IRS stole more than $17 million from innocent business owners, deliberately targeting their earnings for an easy steal. Using obscure anti-money laundering rules and civil asset forfeiture, the agency compromised the rights of individuals and their businesses, a government watchdog has discovered.

The Treasury Inspector General for Tax Administration (TIGTA) released a report on March 30 that details how IRS investigators seized hundreds of bank accounts from business owners based on nothing but a suspicious pattern of deposits.

In more than 90 percent of those cases, the money was completely legal. The audit also found that investigators violated internal policies when conducting interviews, failed to notify individuals of their rights, and improperly bargained to resolve civil cases.

To combat criminal activity, individuals and businesses are required to report all bank deposits greater than $10,000 to federal authorities. Intentionally splitting up large sums of cash into sub-$10,000 amounts to avoid that reporting requirement is known as “structuring” and is illegal under the federal Bank Secrecy Act.

But many business owners engaged in perfectly legal activities may be unaware of the law. Others are covered by insurance policies that don’t cover cash losses greater than $10,000. Still others simply want to avoid extra paperwork, and keep their deposits less than $10,000 on the advice of bank employees or colleagues.

Under the Act, structuring IS technically a crime, but the reporting requirements were enacted to detect serious criminal activity – including terrorist activities, money laundering, and drug trafficking.

They “were not put in place just so that the Government could enforce the reporting requirements,” as the IG’s report explains.

But the IRS didn’t let that stop them. The agency pursued hundreds of cases from 2012 to 2015 on suspicion of structuring, but with no indications of connections to any criminal activity. Simply depositing cash in sums of less than $10,000 was all that it took to arouse agents’ suspicions, leading to the eventual seizure and forfeiture of millions of dollars in cash from people not otherwise suspected of criminal activity.

The inspector general found money seized and forfeited by the IRS was legally obtained in 91 percent of a sample of 278 structuring investigations it reviewed occurring between fiscal years 2012 and 2014. Altogether, those funds totaled $17.1 million and involved 231 cases.

The investigation was launched in 2014 after lawsuits and research by the Institute for Justice (IJ), including its report Seize First, Question Later, which is cited by TIGTA, helped bring the abuses to the public’s attention.

IJ Attorney Robert Everett Johnson issued a statement in response to the report, and some details he points out are particularly concerning:

The IRS gave no warning prior to these seizures, and the IRS did not speak to property owners to see if there might be some honest explanation for the pattern. Shockingly, even when property owners provided an innocent explanation for their banking practices following the seizures, the IRS watchdog found that the agency did not even consider whether it might be true. That disregard for the pursuit of justice is the unfortunate but unsurprising result of civil forfeiture’s profit incentive, which allows agencies like the IRS to use money that they seize to fund their budgets.

The IRS and the DOJ have returned some money to some victims, but until all of the ill-gotten assets are returned to their proper owners, justice will not be served, says IJ.

It is unclear whether structuring forfeiture cases make up a small or large percentage of all IRS forfeitures, because the IRS does not publish that information and denied requests filed under the Freedom of Information Act to make it public.

The findings of the TIGTA audit were released shortly after another government corruption bombshell was revealed: The US Drug Enforcement Administration (DEA) seized $3.2 billion in cash over a 10-year period from people who were never under criminal investigation.