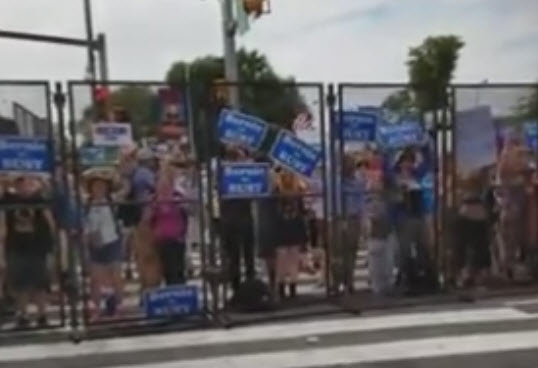 Editor’s Comment: It is time that the people of America faced the reality of how limited their “choices” for leaders really are, and how deeply the repression of real candidates and real issues goes. Every four years, they waste the time and energy of the general public – intentionally – to make a ritual out of giving consent to the psychopathic to rule over the sheeple. These people do not represent or serve you or the issues of ordinary people. (Of course SHTF readers and anyone with two brain cells already know that.)

The tactics of stifling free speech, and making a mockery of those who have chosen to stand up against the system, only illustrates how far gone this country is, and how illusive the state of “freedom” really is. Politics, elections, power in the hands of a federal government – these people and institutions have long been accepted and normalized, despite the predatory nature of their activities, despite the phoniness, despite the broken promises and utter B.S. that they spew. Though most Americans recognize the futility and the corruption of these parties and politicians – who could ignore the release of damning information against the DNC? – they perform cognitive dissonance, and continue to support, endorse, vote for – and at least in spirit – “elect” their own oppressors, and by extension their own enslavement. When will this vicious cycle end, and how blatant must the tyranny become?

Congress shall make no law respecting an establishment of religion, or prohibiting the free exercise thereof; or abridging the freedom of speech, or of the press; or the right of the people peaceably to assemble, and to petition the Government for a redress of grievances. — The First Amendment

Congress shall make no law… but they shall erect a “free speech cage”.

Yeah, this really looks like freedom. Look at these people. Is this a zoo, you might ask?

No. It’s protesters exercising their First Amendment rights to shout “Hell no, DNC! We won’t vote for Hillary!” over and over outside the corrupt dog and pony show that is the Democratic National Convention — in a rusty metal cage that looks like something out of the horror film Silent Hill.

What a sad, pathetic testament to modern American “freedom” this is.

And what a sad, pathetic circus sideshow this whole fake, rigged “selection” process to nominate Hillary has been.

(That cage is what the entire nation is about to become if Hillary becomes president, just by the way.)