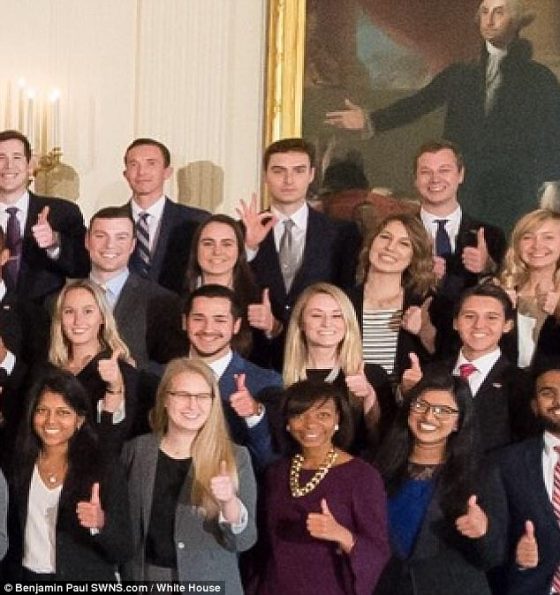 Another day, another piece of evidence that points to the stunning fact that the mainstream media is willing to spread complete disinformation on a daily basis in their desperate, never ending attempt to hurt President Trump.

The latest example comes in the form of a pathetic hit piece in The Daily Mail that claims that former White House Intern Jack Breuer used a racist hand gesture in a November photo op with the president and fellow interns.

The problem? Breuer isn’t actually a white supremacist and was flashing the ‘OK’ hand gesture that the president and others have used in the past. Keep in mind that the ADL itself has already confirmed this is NOT a racist hand symbol.

A former White House intern is coming under fire after flashing a known ‘white power’ sign during a photo-op with President Donald Trump.

It is the same sign that white nationalist Richard Spencer gave on the steps of the Trump International Hotel on election night and that right-wing provocateur Milo Yiannopoulos posed with in front of the White House.

It was also seen at the Unite the Right rally in Charlottesville, Virginia, in August – the same day an alleged Nazi sympathizer accelerated his car into anti-protesters, killing one and injuring several others.

All those surrounding Breuer on the right side of the picture are using their left hands to give their thumbs-up, with him standing out by using his right hand.

The gesture – which only makes sense if made with the right hand, although there are examples of people making it with their left hand – is said to depict the letter ‘W’ with the outstretched middle, ring and little fingers, and a ‘P’ with the circle made by the thumb and forefinger stretching down to the wrist. Together ‘WP’ stands for White Power.

As Paul Joseph Watson rightfully noted, the hand gesture has nothing to do with racism even if actual white supremacists have used it in the past.

Unfortunately for the Daily Mail, allegations that the hand symbol, which actually represents “OK,” equates to white supremacy were debunked by none other than the ADL in May of this year.

“Has the simple thumb-and-forefinger ‘OK’ hand gesture become a white supremacist hand sign? Well, no, it hasn’t, but you are likely to hear just the opposite from social media, thanks to the latest hoax from members of notorious website 4chan,” the ADL said.

In some of our intern pictures, I emulated the OK sign the President sometimes makes. That was foolish. I should have listened more closely to the Commander-in-Chief and given the thumbs up. (1/2)

I’m proud of my Jewish heritage and strongly reject the hateful views associated with racist white power organizations. I would never make common cause with them. (2/2)

Despite the fact that the claims in the Daily Mail article have been fully debunked, the news outlet has so far refused to correct or take down the fake news report, instead spreading it to tens of thousands of readers, many who are only too happy to believe literally anything negative about the Trump White House.

As Trump himself has noted many times, the establishment media readily spreads fake news on a daily basis and the vast majority are openly working against him.

This is simply one more example.