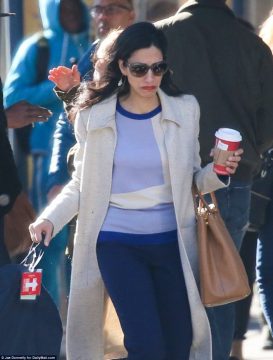 The State Department has released over 2,000 emails belonging to top Hillary Clinton operative Huma Abedin that were found on her disgraced former husband Anthony Weiner’s laptop and a number of the documents contained classified, confidential, and heavily redacted information.

Although media reports on the emails have so far varied, it has been confirmed that there were indeed classified documents on the laptop in question and that the FBI KNEW this fact but refused to charge Abedin or Clinton with any crime.

A CNN report on the emails attempted to downplay Abedin’s knowledge of the classified material but nonetheless confirmed that certain emails should not have been on the laptop in the first place.

The emails weren’t marked as classified, though the FBI later found classified information contained in some emails recovered from Weiner’s laptop.

CNN has previously reported it was likely that some of the emails stored on Weiner’s laptop contained classified information, and fired FBI Director Comey testified that there is no indication Abedin “had a sense that what she was doing was in violation of the law.”

The fact that Clinton and Abedin previously exchanged classified emails gave federal prosecutors probable cause to justify their review of Weiner’s laptop in fall 2015, according to a search warrant application released in December 2016.

Though neither Abedin nor Weiner was identified by name in the search warrant documentation, and the court ordered the materials redacted, the affidavit in support of the warrant makes clear that the FBI argued that there was further probable cause to search Weiner’s hard drive in light of the fact that Abedin and Clinton previously exchanged classified emails.

Yes, you read that correctly. CNN and the Clinton shills in the FBI expect the American people to believe that Abedin wasn’t aware that taking classified material home was illegal.

Interestingly, Abedin made a trip to Clinton’s Manhattan office just hours before the release of the emails in a move that many believe was connected to the email release itself.

Huma Abedin was spotted heading into the Hillary Clinton offices in midtown Manhattan on Friday just a few hours before the release of 2,800 of her emails.

The longtime aide to Hillary Clinton was joined by her son Jordan, who she has been raising as a single mother ever since her husband Anthony Wiener entered a correctional facility in Pennsylvania earlier this year.

Abedin submitted her divorce papers on the same day Weiner appeared in court to enter his guilty plea back in May.

Weiner was sentenced to 21 months behind bars and ordered to pay $10,000 after entering a guilty plea to a single charge of transferring obscene material to a minor.

The emails contained on Weiner’s laptop included national security discussions, with classified information, that would have gotten any other person arrested and charged by the FBI immediately.

The emails date from 2010, 2011 and 2012 and concern discussions with Middle East leaders including some from Israel, the United Arab Emirates, Hamas and the Palestinian Authority.

Large portions, including entire pages, were redacted before the documents’ release.

The charges against Weiner arose after DailyMail.com revealed in September of last year that he had been sexting a 15-year-old high school student from North Carolina for months.

In the wake of that revelation he had his laptop seized, and emails found on the device led to a second FBI probe into Clinton’s email server, which she later claimed cost her the election.

It is those emails that have now been released by the State Department.

All in all this is simply more proof that high-level Clinton operatives within the FBI not only allowed Clinton to get away with the email scandal, they also let Abedin off the hook as well.