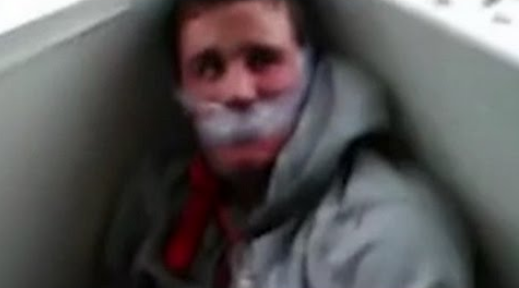 This article was written by Paul Joseph Watson and originally published at Infowars.com

Editor’s Comment: There’s a complete lack of understanding in the people about who the real enemy is. Instead, groups divided by race attack each other based on race, and on general assumptions about the election. There is little doubt that this nation can be torn down by dividing among itself.

After months of touting the victimhood of Black Lives Matter protesters, and the sanctity of their cause, the media can no longer look away from disturbing cases of black-on-white crimes of abuse, harassment, torture, humiliation and the like. Despite all this, the portrayal of the opposite of this event is likely to drag on with the fresh face and divisive politics of the next president.

A shocking video shows a white man bound, gagged and bloody as a gang of racist black thugs force him to say “f**k Donald Trump” and “f**k white people”.

The video was uploaded to Facebook live yesterday by a user named Brittany Herring, the African-American woman who appears in the clip.

The 30 minute video shows a young man tied up in a corner with blood coming from his head. The man’s mouth is gagged as thugs humiliate and abuse him.

The victim is repeatedly kicked and hit while forced to denounce white people and Donald Trump.

“You can’t be racist to white people” pic.twitter.com/EYMwdTjrc7

Chicago police tell Fox 32 that four people are in custody and authorities are conducting further investigation.

The young man seen in the clip, who has special needs, is now in hospital and is being treated for his injuries.

“The incident took place Tuesday in an apartment on the 3400 block of West Lexington on Chicago’s West Side,” according to police.

The footage is a chilling illustration of how anti-Trump hatred, which accelerated after the election, is now completely out of control.

Will the media even cover this footage or will news networks like CNN bury the story as they continue to hype hoax hate crimes faked by anti-Trump leftists?

This article was written by Paul Joseph Watson and originally published at Infowars.com