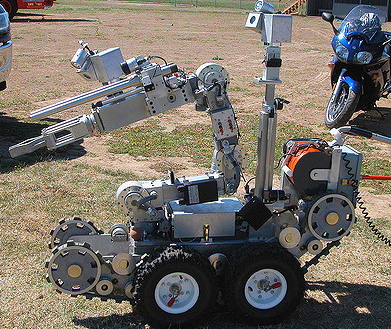 This article was written by Claire Bernish and originally published at TheAntiMedia.org.

Editor’s Comment: Almost thirty years after action movies like Robocop and Terminator predicted a future where we’d be policed by robots, or even hunted down by them, it is actually happening. The Dallas Police opened up a can of controversial worms with their decision to ignore due process and use a robot to deliver a bomb and kill the suspect. The same machine could have used knock out gas or some other substance to disable the suspect.

Right or wrong, there is no turning back now. We can all expect the rise of robots in law enforcement. Will justice come swiftly in the streets by efficient patrols of robots, or will the country we once knew become a dismal and dark place where humans fear the longer and longer arm of the law?

A hotly-contested decision by law enforcement to use a drone robot to blow up a U.S. citizen, who allegedly carried out the murders of five police officers in Dallas, just got exponentially more controversial—because, according to Dallas Police Chief David Brown, the “whole idea was improvised in about 15 to 20 minutes.”

Already igniting fury around the country for neglecting any semblance of due process, the use of the “Remotec model F-5” to deliver a pound of C-4 explosive to decimate suspected shooter Micah Xavier Johnson as he targeted police in a sniper-style attack, has been revealed by the police chief as a hastily-plotted … whim.

Brown’s disturbing offhand comment came during a press conference in which the model of the “mechanical tactical drone”—clarified as the “Remotec Andros Mark V-A1″—was finally made public, in an apparent attempt to quell constitutional rights’ advocates ire over the unprecedented move by police.

While Johnson’s cold-blooded attack on random police officers in one of the most progressive and reform-minded forces in the country landed an official black mark in the annals of American history, the—as many advocates warn—egregious violation of his human and constitutional rights as the first U.S. citizen blown up in this manner earned police, themselves, a similarly notorious mark.

Obviously, the controversy doesn’t end with a model name—the drone isn’t the issue for most people outraged over its use; rather, the fact a citizen was bombed without so much as a nod of consideration for his human, civil, or constitutional rights that has people steamed.

As Daniel McAdams for the Ron Paul Institute keenly noted, following the now-apparent improvised and hasty decision by law enforcement to explode Johnson:

“The media and opinion leaders are presenting us with a false choice: if we question the use of drones to kill Americans—even if we suspect they have done very bad things—we somehow do not care about the lives of police officers. That is not the case. It is perfectly possible to not want police officers to be killed in the line of duty but to wholeheartedly reject the idea of authorities using drones to remotely kill Americans before they are found guilty.”

Noting police originally suspected a different person altogether of perpetrating the attacks, McAdams implored the country to consider the ramifications of setting such a precedent—and, considering the disclosure of the nearly impromptu decision to use this drone, that warning should be an imperative.

Perhaps we all need to familiarize ourselves with this drone’s mechanics now that this dystopic precedent has been set.

Manufactured by the military-industrial complex’s darling, Northrop Grumman, this tactical robot “is driven by a human via remote control, weighs 790 pounds and has a top speed of 3.5 mph,” as the Washington Post described. “It carries a camera with a 26x optical zoom and 12x digital zoom. When its arm is fully extended, it can lift a 60-pound weight. The ‘hand’ at the end of the arm can apply a grip of about 50 pounds of force.”

According to Metro UK, the same model once assisted the California Highway Patrol when negotiations with a man threatening to kill himself by jumping from a San Jose overpass failed—by delivering a pizza.

Technological advancement, though overwhelmingly positive, is only as beneficent as those who put it to use—and how they choose to employ it.

In just one year, a pizza-delivering robot with the potential to save human life during bomb threats or similar situations became a casually-deployed, due process-stripping weapon of war against a U.S. citizen.

It would be prudent we take more than just a minute to critically consider that.

This article was written by Claire Bernish and originally published at TheAntiMedia.org.