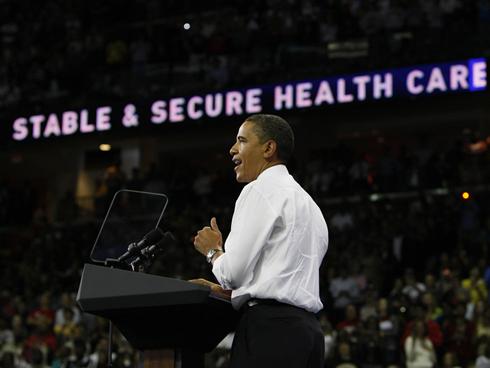 Editor’s Comment: This insurance scam – enforced essentially at gunpoint – is absolutely devastating to the those paying out of pocket, who are forced to meet ridiculous premiums, or the threat of a rather significant fine.

Michael Snyder makes a great point that is true not only for Obamacare, and its colossal injustice, but for post-collapse America in general. The middle class is not wealthy enough to pay outright as the rich can, and they aren’t poor enough either to qualify for free healthcare, government assistance, etc.

Of course, the vast majority of the middle class and working class do not want to live under government assistance, receive handouts, etc. But the forced purchase of absolutely outrageously high healthcare is driving people in that direction. This is particularly true for people working free lance, who own their own business or who are attempting to work for themselves in any other capacity. Paying out of pocket, particularly for a family with children, is an incredible burden, and something has to give. Of course, employers are hiring fewer people – depriving more people of middle class status and/or good jobs – as they are forced to shoulder health care costs. The whole thing is disastrous.

The divisions of society along the wealth gap lines are intensifying – it is as if they actually WANT people to go on welfare and become forcibly dependent upon government for their very existence.

As Predicted, Obamacare Is Absolutely Killing The Middle Class

We witnessed the latest stunning example of this phenomenon just a few days ago.  It turns out that Aetna has been losing hundreds of millions of dollars on plans sold through the health exchanges, and now they plan to pull out of the program almost entirely…

Earlier this week, Aetna, which covers about 900,000 people through the health exchanges created under Obamacare, announced that it would dramatically reduce its presence those exchanges. Instead of expanding into five new states this year, as the insurer had previously planned, the company said that it would drop out of 11 of the 15 states in which it currently sells under the law.

Aetna’s decision follows similar moves from other insurers: UnitedHealth announced in April that it would cease selling plans on most exchanges. Shortly after, Humana pulled out of two states, Virginia and Alabama. More than a dozen of the nonprofit health insurance cooperatives set up under the law—health insurance carriers created using government-back loans in order to spur competition—have failed entirely. While some insurers are entering the exchanges, even more are leaving.

Another one of “the big five”, UnitedHealth, is going to lose more than half a billion dollars on Obamacare plans.  So just a few months ago they also announced that they would be dramatically scaling back their participation in the program.

Because of the ridiculous costs, health insurance companies are either going to have to abandon the exchanges completely or they will have to raise rates substantially.

Needless to say, the people that are going to ultimately feel the pain from all of this are consumers…

Customers who are now forced to obtain insurance or pay a hefty fine that grows more costly over time are being left in a difficult position. Americans are essentially stuck between a rock and hard place, either losing coverage entirely, or having to cough up money for a plan they can’t afford.

“Something has to give,” said Larry Levitt, a healthcare law expert at the Kaiser Family Foundation. “Either insurers will drop out or insurers will raise premiums.“

On the low end of the spectrum, tens of millions of poor Americans benefit from government programs that provide health care at little or no cost.

On the other end of the spectrum, the very wealthy can afford to pay the ridiculously high health insurance premiums that we are seeing under Obamacare.

So what this means is that the people that are being hurt the most by Obamacare are those that belong to the middle class.

As I mentioned above, employers are now hiring less workers because of Obamacare, and that is very bad news for the middle class.  One recent study conducted by the Federal Reserve Bank of New York discovered that nearly one out of every five firms is “employing fewer workers” because of this insidious law…

According to a new survey by the Federal Reserve Bank of New York, 20.9% of manufacturing firms in the state said they were employing fewer workers because of the Affordable Care Act, the healthcare law known as Obamacare, while 16.8% of respondents in the service sector said the same.

And middle class Americans that have to pay for their own health insurance are being hit with much higher bills these days.  According to one recent study, it is being projected that the average Obamacare premium will go up 24 percent in 2016…

Now, courtesy of a new study by independent analyst Charles Gaba – who has crunched the numbers for insurers participating in the ACA exchanges in all 50 states – we can also calculate what the average Obamacare premium increase across the entire US will be: using proposed and approved rate increase requests, the average Obamacare premium is expected to surge by a whopping 24% this year.

Even NBC News, which is about as pro-Obama as you can get, is reporting on the crippling premium increases that are devastating the middle class…

Millions of people who pay the full cost of their health insurance will face the sting of rising premiums next year, with no financial help from government subsidies.

Renewal notices bearing the bad news will go out this fall, just as the presidential election is in the home stretch.

“I don’t know if I could swallow another 30 or 40 percent without severely cutting into other things I’m trying to do, like retirement savings or reducing debt,” said Bob Byrnes, of Blaine, Minnesota, a Twin Cities suburb. His monthly premium of $524 is already about 50 percent more than he was paying in 2015, and he has a higher deductible.

All over the nation people are getting hit like this.

Personally, my health insurance company wanted to nearly double the rate I was paying when Obamacare fully kicked in.  So I searched around and found another plan that was only about a 30 percent increase, but at least it wasn’t nearly double what I had been paying before.

But when the time came to renew that plan, they wanted to jump my premium up another 50 percent per month.

Those of us that are in the middle are being crushed by Obamacare.  We aren’t poor enough to qualify for government assistance, and we aren’t wealthy enough for these ridiculous health insurance premiums not to matter.

Just about everything that Barack Obama promised us about Obamacare has turned out to be a lie.

So where in the accountability?

This is one of the big reasons why nearly one out of every five U.S. adults lives with their parents or their grandparents these days.  Many young adults cannot afford the basics of life such as health insurance, and so they have got to find a way to cut back expenses somewhere.  If that means moving back in with Mom and Dad, that is what some of them are going to do.

I am astounded that our system of health care has become so messed up.  But this is just more evidence of how our society is falling apart in thousands of different ways, and I am not optimistic that things will be turned around any time soon.