THE SCIENCE OF MARKET SPECULATION

This evidence is good enough to play and the One-handed Economist is back in a bullish position with regard to gold and gold stocks. We will soon know if this is correct because gold will rise and break above the Dec. 3 peak of $1,229. 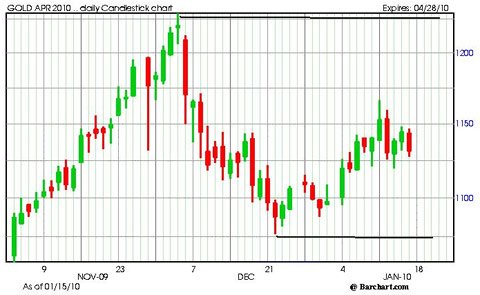 The importance of this event is that, on the longer term chart, it leaves a sizable gap between the (Sept.) break out point ($1,000) and the (Dec. 22) pullback ($1,075). If this gap holds up (and right now I think it will), then it has enormous technical significance.

In a word, gold is going to the moon.

Below is the long term chart on gold, of which the above chart is merely the tip end. It is one of the most basic rules of technical analysis that, when an economic good has a pattern of higher highs and higher lows, the good is in an uptrend This was the discovery of Charles Dow and was the basis for Dow Theory. Dow applied his theory to the stock market and required that uptrends exist in both his Industrials and Rails averages to predict an uptrend in the stock market as a whole. (It is a mystery among most people today why Dow chose Rails as a special industry of equal importance with Industrials, which consist of many industries. The argument was later made that industrials produce goods and rails carry them to market. However, when passengers began to be carried by airlines rather than railroads, nobody thought that the airlines were a special group which had to be identified separately. Actually, Rails and Industrials were identified as the two important groups of stocks because in the late 19 th century almost all companies big enough to issue stock were railroads. They were the dominant industry of the period. Indeed, Charles Dow was constructing stock indexes as far back as 1885, and these early indexes were 100% railroads. In 1885, the non-railroad industries were just not important enough to matter.) 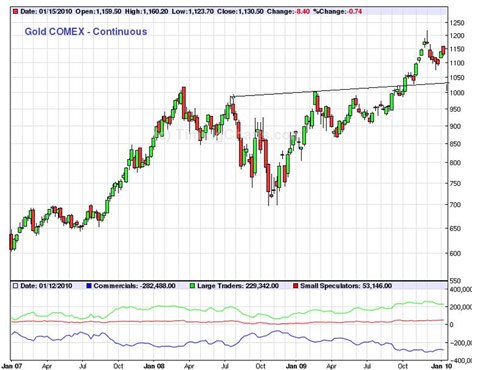 When an important breakout occurs, as happened with gold at the end of September, there is a powerful tendency for the good to advance a distance and then pull back to the breakout point. Most such pullbacks will come back to the breakout point fairly precisely. But there are two exceptions. In one case, the good will return to the breakout point and go some distance into it. This shows long term weakness. The good must draw on some of its support in order to make the turn up. In the normal pullback, the good only draws on a little of its support. But with the second exception, the good does not need to use any support at all. In the case of gold here in 2010, the support is at $1,000. If gold has made its turn at $1,075, then it has not yet met its support, and if it can now move up without the aid of that support, then the long term uptrend must be much stronger (than the other two cases).

This analysis of support is an example of the science of market speculation. Remember, a speculator is one who seeks to make a profit by buying low and selling high (not necessarily in that order). This is as distinct from an investor, who merely wants to put his money to work and does not try to predict the market. The investor in stocks wants to make a larger return on capital than he could have made by putting his money into the savings bank or T-bonds. But he doesnâ€™t know what stocks are going to do and doesnâ€™t care to make the effort to find out. Therefore, we gold bugs are speculators, not investors. Gold, at this corrupt stage of history, does not yield interest, and therefore we must make our money in gold by speculation, not investing.

And the key principle of speculation is to know what the other fellow is going to do (before he does it). The idea that one can make a market go up by buying it (or down by selling it) is an illusion. It goes up on the immediate buying. But then it settles back. Pretty soon you are loaded up with a big position. You say to your broker, â€œsell.â€ And he replies â€œto whom?â€ Bunker Hunt found that out the hard way in March 1980. Rather the successful speculator has planned in advance and knows that, after he has accumulated his position, there will be people anxious to buy it from him. (The first speculator known to history is the famous philosopher, Thales of Miletus, who predicted, from his study of the weather, that the following year would be a good one for olives. He speculated in olive presses and made a big profit.) In 1970, you could get very few people to buy gold stocks with the metal at $35. But in 1980, they were screaming to buy with the metal at $875. Successful gold speculators of the 1970s were able to correctly predict this behavior

But if we are to predict the behavior of other people, then we have to understand how they think. It is a big flaw in modern day technical analysis that it does not examine what people are thinking or how they are going to behave. It simply says, â€œWe donâ€™t know why it works, but it works.â€ Well, (correct) principles of technical analysis do work. But that is not enough. To correctly predict future behavior, in any field of human endeavor, we must understand the cause and effect relations which govern the particular subject. This is what makes an area of study scientific. The scientist is always searching for cause and effect.

The big error that most people make in the markets is that they accept an idea from another philosopher, Thomas Aquinas. Aquinas was not as smart as Thales. He taught that every good had a fair price. The Catholic Church spread this idea over much of the world. People who believe in the fair price theory of Aquinas take as the fair price the price they are used to. When a good trades near the same price for a long time, these people come to think that it is the fair price. An example of this is gold from March 2008 to Sept. 2009. For much of this period, it traded at or not too far from $1,000. By late Sept. â€™09, a great many people had come to believe that $1,000 was a fair price for gold. (The same thing happened when gold traded at $35/oz between 1935 and 1968.) Then when gold moved above its â€œfairâ€ price, these people come in to sell.

But wait a minute? The good is going up. Yet this large number of fair-price people are selling. Who is buying? There must be some more powerful force which is causing the good to rise. Furthermore, the fair-price people always lose. This is because, as they get used to the new, higher price, they adjust their concept of the fair price upward. (In the present case, we can be pretty sure that the buying is caused by the up forces of the commodity pendulum and the new, trillion dollar deficits. But even if we do not know what the buying is from, we do know that it exists and is virtually certain to win over the selling.) The gap which exists in gold between the Dec. 22 bottom of $1,075 and the breakout point of late Sept. of $1,000 â€“ if it remains open â€“ is a giant technical fact proving that the up forces are stronger than the down forces. It is a window on the future.

The One-handed Economist is my fortnightly (every 2 weeks) newsletter commenting on gold and the other financial markets. The cost is $300 per year. I have spelled out my position over the past few weeks. Now the market will tell its story. I should note that a subscription does not include personal consultation. This would take up too much time and be too costly. I do however appreciate general questions. If there are enough questions on a topic, I may decide to comment in the newsletter. If you are interesting in subscribing, you may go to my website, www.thegoldspeculator.com, or you may subscribe by ordinary mail by sending $300 to The One-handed Economist, 614 Nashua St. #122, Milford, N.H. 03055. (Include your e-mail address if you want the more rapid e-mail service.)

NOTE I am suspending my blog (which comments on political and social events).for lack of time. However, I have written a book on the loss of freedom in our day and a strategy for winning it back. This book is called The Wolf in Sheepâ€™s Clothing, and I am hopeful that it will be ready for publication about mid-year.

The book starts out from the fact that western man had an approximate 500 year period of increasing freedom (from the Peasantâ€™s Revolt in England in 1381 to the end of the 19 th century) But this was followed by a counter trend away from freedom (from about 1900 to the present) This counter trend was a deliberate strategy by the evil forces which must be understood to be successfully reversed. More to come.